Thanks to spices such as cardamom, cloves, turmeric, coriander seed, and garam masala, these vegetables in luxurious royal sauce are a true taste sensation. 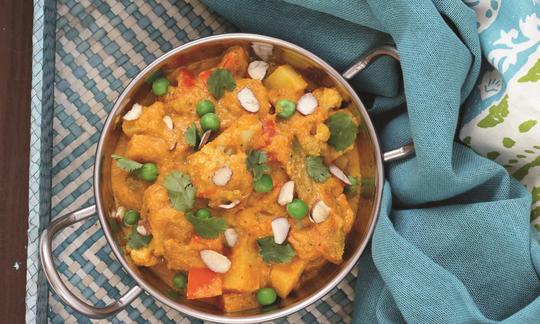 Thanks to spices such as cardamom, cloves, turmeric, coriander seed, and garam masala, these vegetables in luxurious royal sauce are a true taste sensation.

Vegetables in luxurious royal sauce: “Navratan Korma is a rich dish that literally translates to ‘nine-gem curry.’ The gems are the vegetables, fruit, and nuts. Mughlai dishes are usually over-the-top and include dried fruit and nuts and heavy cream or coconut milk. These Mughlail dishes such as korma and makhani were made to serve kings and queens. For this restaurant-style version, some tomato is usually added for color.” (Richa Hingle)

Garam masala: This Indian spice mix contains many spices, such as black cardamom, cinnamon, cloves, black pepper, and cumin. Chili and coriander seed are also often included. You can make garam masala yourself (There is a recipe in the cookbook Vegan Richa’s Indian Cuisine on page 246.) or you can buy it as a spice mix, usually ground, in Indian grocery stores, well-stocked supermarkets, or online. When made from whole spices, garam masala stays aromatic and fresh longer.

Safflower oil: This oil is normally obtained by cold pressing safflower seeds (Carthamus tinctorius). The safflower plant was used by the Egyptians as early as 3500 BC as a “dye plant,” for example, to dye mummy wraps. The red and yellow pigments of the petals are still used today as dyes in cosmetics and the food industry. And they are sometimes also used as a substitute for saffron because they are cheaper, but the differences between the two can be easily seen. Safflower oil basically comes in two types: as an oil with a higher proportion of esterified oleic acid and another type in which the esterified linoleic acid predominates.

Cardamom: Cardamom, which comes from India, is not only a very old spice, it is also one of the most expensive — after vanilla and saffron threads. This is a result of the unpredictable and labor-intensive harvest conditions. Cardamom seeds are often used in Asian and Arabic dishes and also have many medicinal uses. The substances contained in cardamom seeds stimulate the secretion of saliva, gastric juice, and bile. We distinguish between black cardamon (Amomum subulatum), which has an earthy fragrance and smoky flavor and is therefore used for more hearty and spicy foods and green cardamom (Elettaria cardamomum), which has a sweet and slightly spicy flavor and is often used in spice mixes and desserts.

Coriander: Some people have a negative reaction to the intense, slightly soapy flavor of coriander. They may simply not like it or even develop nausea. According to statistics in Switzerland, up to 15% of those with allergies are sensitive to coriander. In such cases, simply leave the ingredient out.

Side dishes: “Serve with puffy naan or other flatbreads.” Rice also goes well with this dish.

Saving time: “You can reduce the active time by starting the sauce in Step 1 while the water is heating.”

Salt: The original recipe calls for 1¼–1½ tsp salt. We have deliberately reduced the amount. The aim is to keep the salt content as low as possible, without having any loss in flavor. Since the salt needed varies according to taste, it is best to decide for yourself how much to use. For an interesting book on the subject, we would like to recommend you read the book Salt, Sugar, Fat.

Pineapple/Pomegranate seeds: “Add ¼ cup (50 g) chopped pineapple or pomegranate seeds with the raisins. Fry the nuts and raisins in 1 teaspoon of oil until golden and then add them to the sauce at Step 3 with the vegetables.”

Chili/Powder: Instead of the cayenne pepper, you can also use chili powder or grated chili. If you like it spicy, you can also increase the amount according to taste.