Alpha-Linolenic acid (ALA) is an essential omega-3 fatty acid that plays a critical role in inflammation processes. Flaxseed contains large amounts of ALA. 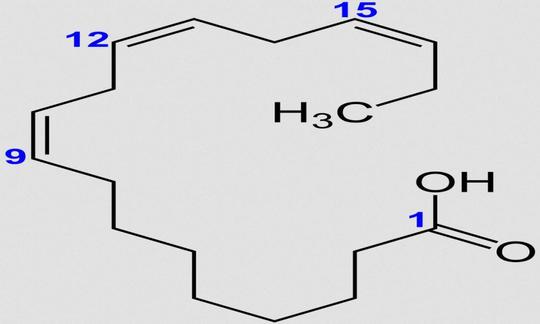 As a result of using more cooking oil, vegans and vegetarians often consume an excess of omega-6 fatty acids, and their ratio of omega-6 to omega-3 fatty acids is then even worse than in the case of omnivores. This can be fatal.

Our motto is to “eat natural whole foods.”

Erb Muesli has been developed to compensate for this poor ratio. It contains much larger amounts of “anti-inflammatory omega-3” than of omega-6, which promotes inflammation.

Vegans who are pregnant or breast-feeding should pay special attention to achieving a healthy ratio to ensure that they are producing enough DHA.

The links that appear in bold are at least reasonably well-described vegan ingredients. Well-described ones have a star behind them. But we were only able to begin to describe the majority of the ingredients as abstract, because we carried out extensive research on them.

Because of the large number of ingredients, here is another way to search. Only ingredients without nutrient tables are not included in the list.

Alpha-linolenic acid (ALA) is an essential n-3 polyunsaturated fatty acid that is one of the omega-3 fatty acids.

Essential means that our body cannot produce (synthesize) this fatty acid on its own, and we therefore need to get it from our diet.

Our body, for example, needs alpha-linolenic acid to produce the omega-3 fatty acids eicosapentaenoic acid (EPA) and docosahexaenoic acid (DHA). Both of these substances have anti-inflammatory effects.

See article A Vegan Diet Can Be Unhealthy. Nutrition Mistakes.

The primary sources of α-linolenic acids are nuts and seeds such as flaxseed (20 g/100 g), chia seeds (18), walnuts (9), and the corresponding oils: flaxseed oil (53) and walnut oil (15). In addition, canola oil (9) and green herbs and vegetables such as avocados (0.1) and dried oregano (0.6) include significant amounts. Plants contain almost exclusively α-linolenic acid, whereas docosahexaenoic acid (DHA) and eicosapentaenoic acid (EPA) are primarily found in fish such as eel, carp, and sardines as well as in algae.1

Losses during storage and preparation:

Linolenic acid is very sensitive to oxidation. Oils with a high alpha-linolenic acid content such as flaxseed oil should therefore be stored in a dark bottle away from light, not heated, and used within a short period of time. In order to optimally take advantage of the nutrients in flaxseed and other oilseeds, you should use flaxseed directly after freshly grinding. After the seeds are ground, they are also very sensitive to oxidation, and it is best not to store them but instead to eat them immediately.

See Erb Muesli, a recipe designed to compensate for our daily deficiencies by providing more ALA (omega-3 fatty acids) than LA. A serving of this muesli alone covers the daily requirement of ALA.

From alpha-linolenic acid, the body forms for instance the omega-3 fatty acids eicosapentaenoic acid (EPA) and docosahexaenoic acid (DHA). Both have an anti-inflammatory effect!

For adults, 0.5 % of their daily energy intake should come from α-linolenic acid; this is about 1.5 g.
Since α-linolenic acid is extremely important for brain development, infants and small children need to have a higher total intake of polyunsaturated fatty acids. If the mother consumes adequate levels of both essential fatty acids, then the babyʼs needs are normally covered via breast milk. A healthy intake of omega-3 fatty acids is linked to a ratio of omega-6 fatty acids to omega-3 fatty acids of a maximum of 5:1 instead of 10:1 (or more), which is typical of a normal western diet.2, 3, 4 A ratio of 2:1, such as used to be the case in Japan, is optimal — according to other experts (e.g., Dr. Greger), 1:1 would be even better. 6

Functions in our body etc:

As with other polyunsaturated fatty acids, alpha-linolenic acid is an essential component of the cell membranes in the human body. They are found in especially high concentrations in the brain and nerve cells and as a component of the retina they are essential for healthy eyes. In addition, polyunsaturated fatty acids are important for the healthy development of the brain and eyes in babies and small children.

This process involves the same enzymes that use linoleic acid (LA, omega-6-fatty acid) to produce dihomo-γ-linolenic acid (DGLA) and arachidonic acid (AA). While the body uses EPA and DGLA to produce the anti-inflammatory eicosanoids (immunomodulators), it uses arachidonic acid to produce eicosanoids that promote inflammation.
The two are therefore in constant competition. If an enzyme is busy converting omega-6 fatty acids into these type of eicosanoids, it cannot assimilate omega-3 fatty acids at the same time. This is why the ratio of the two fatty acids ALA and LA is so essential.

In contrast to LA, ALA has a high affinity to these enzymes. In this way, a sufficient intake of foods rich in alpha-linolenic leads to both an increase in EPA synthesis and a decrease in the synthesis of arachidonic acid. To maintain the activity of the enzymes, it is also necessary to have a sufficient supply of magnesium, calcium, vitamin B6, biotin, and zinc.2,3,4,5

In addition, ALA widens the blood vessels, helping to prevent atherosclerosis and thromboses. DHA and EPA are also thought to help prevent osteoporosis, Parkinsonʼs, autoimmune diseases, and rheumatic disorders. They inhibit the emergence of type 2 diabetes, obesity, and kidney diseases.

As part of the fat metabolism process, alpha-linolenic acid is broken down by mechanical and enzymatic action in the gastrointestinal tract (mouth, stomach, and small intestine). After the fatty acids are broken down, they reach the intestinal cells via the micelles and from there bound as lipoproteins continue via the blood and lymph to the liver and other target cells such as brain, heart, and skin cells.2

The acyl-coenzyme A binding protein serves as an intracellular pool and carrier of activated long-chain fatty acids and ensures the resynthesis of triglycerides and phospholipids in the smooth endoplasmic reticulum. The degradation of fatty acids takes place in all of our body cells and is localized in the mitochondria (beta-oxidation).