The traditional version of pad thai has nothing on this Fully Raw Pad Thai. The sesame dressing and bright garnish give this dish the perfect final touch. 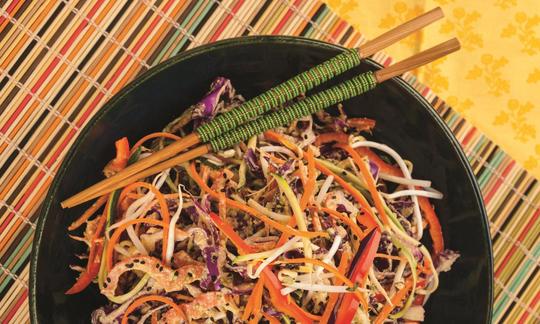 The traditional version of pad thai has nothing on this Fully Raw Pad Thai. The sesame dressing and bright garnish give this dish the perfect final touch.

Serving size: The author indicates that this recipe makes enough for 2 large servings. We find that it makes enough to serve 4 people. If you or your guests are especially hungry, you can make adjustments accordingly. Leftovers store well in the refrigerator until the next day.

Sesame seeds: Sesame (Sesamum indicum) is an annual flowering plant that originated in certain areas of India and Africa. Today it is widely cultivated in tropical and subtropical regions around the world and is valued for its oil and edible seeds. Sesame seed is one of the oldest oilseed crops known, and archeologists have documented evidence that the wild variety was domesticated in Asia around 3000 BC. Sesame oil, seeds, and the root have therapeutic and culinary uses. Depending on the type, the seed pods contain either black, brown, or white seeds. Black sesame seeds (Sesamum indicum nigrum) are more aromatic than the white variety. Sesame contains high amounts of calcium and selenium. However, it is also a strong allergen, which is why sesame must be declared on labels.

Mung bean sprouts: Mung bean sprouts, which are often called bean sprouts, are in fact sprouted mung beans. They can be eaten raw or cooked. Related to the soy bean plant, they are originally from India and belong to the Faboideae family of flowering plants. Mung bean sprouts are often mislabeled and sold as soy bean sprouts. Unlike other types of beans, like the garden bean, mung beans do not contain lectin and can therefore be eaten raw. They do not contain trisaccharides either, which means they are easy to digest and do not cause bloating or gas. Thanks to their mildly sweet taste, mung beans can be used in a large variety of dishes, including soups, salads, and classic stir-fries. It is very easy to sprout mung beans, so we recommend that you do it yourself. You will find directions for doing so under Mung bean sprouts in the list of ingredients.

Pat thai: Pat thai, or pad thai, is a traditional Thai noodle dish. There are many varieties of pad thai that can be roughly divided into two main types: the dry and light traditional style, and the heavier western-style dish that is fried in red oil. The traditional version is not vegan and includes rice noodles, beaten eggs, tamarind paste, garlic, fish sauce, chili powder, bean sprouts, dried crabs, tofu, and assorted seafood or meat. It is garnished with peanuts, cilantro, lime, and scallions. The flavor of the dish can be adjusted by adding certain spices before serving, usually chili powder or fish sauce.

During the Second World War, the Thai president declared pat thai the national dish. This was done for mainly economic reasons — as a way to decrease the consumption of rice.

Using untreated ingredients: When you use fruits and vegetables that haven’t been chemically treated, like the author does, you can use the ingredients along with their peels. Carrots are a good example. The carrot is actually the root of the carrot plant that contains the nutritional reserves of the plant. In fact, of all of the vegetables, carrots have the highest levels of carotene, which helps explain their reddish-orange to yellow coloring. The highest concentration of nutrients is in the skin, which is lost if carrots are peeled.

Cilantro (fresh coriander): There is a wide range of opinions regarding the flavor of cilantro. Some people react to its intensive, slightly soapy aroma with symptoms ranging from aversion to nausea. According to Swiss statistics, 15 % of the allergic population reacts to cilantro. If you prefer, it is fine to simply omit this ingredient. You should realize, however, that it is the cilantro that gives this dish its exotic taste. There is no alternative that has a similar flavor. Flat-leaf parsley may look like cilantro, but it has a completely different flavor.