Spices like cumin and sumac give this Moroccan Pilaf with Pomegranate, Walnuts, and Chickpeas its delicious Asian flavor. 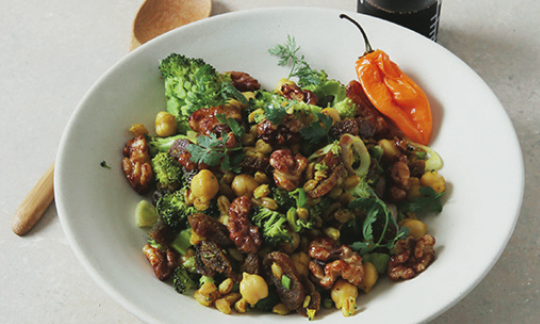 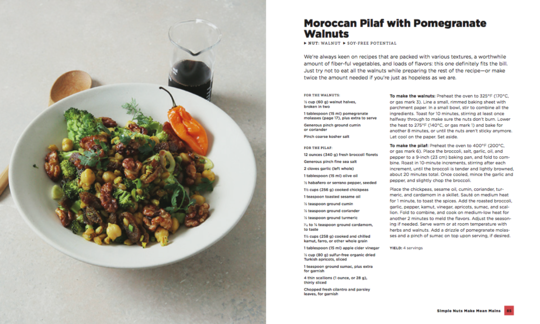 Spices like cumin and sumac give this Moroccan Pilaf with Pomegranate, Walnuts, and Chickpeas its delicious Asian flavor.

Nutritional profile: This dish contains high levels of vitamin K. According to GDA guidelines, one serving of this recipe also covers the recommended daily requirement for vitamin C and manganese. The ratio of omega-6 to omega-3 fatty acids does not exceed the maximum recommended ratio of 5:1. Further information can be found at the following link: A Vegan Diet Can Be Unhealthy. Nutrition Mistakes.

Walnuts: English walnuts (also called Persian walnuts or Circassian walnuts, Juglans regia) are the most common type of walnut in Central Europe. Walnuts are the nuts that have the highest content of alpha-linolenic acid (ALA). They are also rich in tocopherols, a group of four different forms of vitamin E, as well as many macroelements and trace elements.

Pomegranate syrup: Pomegranate syrup is an alcohol-free, sugar-sweetened fruit syrup that has a deep red color and is used in cocktails for flavor and to add color. When you are purchasing this product, make sure that it is authentic pomegranate syrup and not grenadine syrup.

Kamut: Kamut or Khorasan wheat is one of the oldest grains and related to the wheat we have today. The kernels of this ancient grain are almost twice as large as those of conventional wheat and more yellow in color.

Chickpeas: With an average of 20 g protein per 100 g, chickpeas are very high in protein and therefore a good addition to vegetables. Chickpeas (like many other legumes) are usually available in stores either dried or precooked (canned). While the canned version is of course more convenient and time-efficient, dried chickpeas that you cook yourself have a much better taste. And when you cook them at home, you can decide how firm you want them to be (canned chickpeas are often very soft, sometimes even mushy). In addition, canned foods often contain unnecessary additives or are already salted. It is therefore best to use the unprocessed version whenever possible.

Sumac: Sumac is a typical Arabic or oriental spice and is actually called Sicilian sumac, tanner’s sumach, or elm-leaved sumach. The spice is dried and usually sold in ground form. The tart dark red spice is often mixed with salt and is particularly popular in Turkish, Arabic, Kurdish, and Persian cuisine.

Cumin: As they have a similar name in many languages (e.g., in German: Kreuzkümmel and Kümmel), cumin and caraway are often confused. However, they actually aren’t closely related and have a very different flavor. Cumin is often used in Indian, Turkish, and Greek cuisine.

Cooking kamut: It’s best to let the kamut soak in water overnight before cooking it the next day. Make sure to pour off the soaking water and use new water to cook it in.

Buying canned chickpeas: If you are going to use the quick variety, as the author suggests here, then make sure to buy organic chickpeas. These are often processed more gently, and most importantly they usually contain very few or no additives at all. It is better to buy organic chickpeas in glass jars (organic brands often choose glass jars). These do not contain any aluminium or BPA (bisphenol A) and are more environmentally friendly.