This carrot cake with a walnut crust and a coconut and citrus flavor is the ideal winter treat for both young and old. 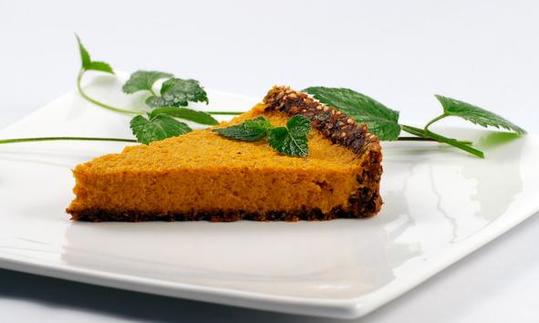 This carrot cake with a walnut crust and a coconut and citrus flavor is the ideal winter treat for both young and old.

Winter treat: “This is an ideal cake for winter because all of the ingredients are available at this time of year.”

Yellow archangel (occurrence and taste): Yellow archangel can be found growing in partially shady areas on the side of the road and as groundcover under bushes and trees. It tastes mild but very flavorful and sometimes slightly resinous. The flowers have a hint of sweetness.

Lemon verbena: As the name indicates, lemon verbena (lemon beebrush) has a citrus fragrance and taste. It also contains substances that stimulate the appetite and digestion, which can be very helpful in the case of digestive problems.

Dried fruit is often treated with sulfur dioxide: Treating dried fruit with sulfur dioxide has two distinct advantages for large-scale industrial producers. First, the sulfur dioxide layer helps to prevent spoiling as it inhibits the metabolism of many microorganisms and in this way increases the shelf life of the product. And second, it allows the fruit to maintain its original color. The latter occurs thanks to the fact that sulfur dioxide inhibits enzymes that promote oxidation. This makes the fruit look more attractive for consumers, but in general we advise against purchasing and consuming dried fruit that has been treated. The preservation process destroys several vitamins, such as folic acid, and sulfur dioxide can be harmful for people with asthma or allergies.

Is fruit treated with sulfur dioxide still raw?: Sulfur dioxide has been used as a preservative since antiquity and is still of great importance today in the production of dried fruit and wine. Thanks to its reducing properties, sulfur dioxide protects the products it is used from oxidation induced by oxygen. However, as a result it also inhibits oxidative enzymes in the fruit and some of these are denatured in the process. Strictly speaking, such fruit can therefore no longer be considered raw. But each person has to decide for themselves how important this is.

Ground vanilla is not vanilla sugar: Although these two terms are sometimes used incorrectly as synonyms, they are two very different products. Ground vanilla, also called vanilla powder, is obtained by grinding vanilla beans. Vanilla sugar, however, is a mixture of vanilla and natural vanilla flavor or vanilla extract.

Characteristics of psyllium: This plant-based ingredient absorbs water and therefore works well as a food thickener and stabilizer — it also creates a better texture. If necessary, you can use chia seeds instead, but they don’t quite achieve the desired result. Psyllium, which has several beneficial characteristics and a neutral taste, can also be used in many other desserts. It is rich in fiber and expands as it moves through the intestine; this stimulates the intestinal musculature and can even help relieve constipation (obstipation).

Sweeter or sourer: Thanks to the almond butter, ground vanilla, dried fruit, and raisins, this cake has a subtle sweetness that comes through a little more than the flavor of the citrus fruits. If the cake is intended for children, you might want to add a little more of the sweet ingredients as children usually like their food sweeter than adults.