With its sharp, bitter, and intense flavor, radicchio doesn’t only complement fennel and mushrooms, it also provides many valuable nutrients — as does quinoa. 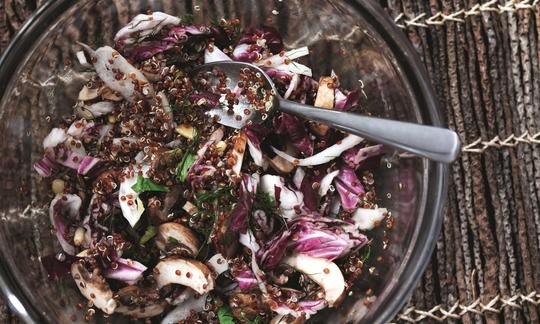 With its sharp, bitter, and intense flavor, radicchio doesn’t only complement fennel and mushrooms, it also provides many valuable nutrients — as does quinoa.

Quinoa: Quinoa is a pseudograin that originated in the South American Andes. The quinoa sold commercially has had the bitter coating called saponin removed. Quinoa is available in a number of different varieties and colors. White quinoa has a light texture when cooked whereas red quinoa has a somewhat richer taste and holds its shape better. Black quinoa holds its shape the best and has an earthy, slightly sweet flavor. It is best to wash quinoa before cooking to remove any remaining traces of the bitter saponin. Quinoa is gluten-free and contains more protein, magnesium, and iron than the other common types of grains. It also contains all of the essential amino acids, including lysine!

Fennel: Fennel originated in the Mediterranean region and Asia Minor, and both the bulb and seeds are used as an ingredient in raw and cooked dishes. IFennel is in the Apiaceae or Umbelliferae family, as is celery. The white to light-green bulb is composed of several layers and therefore has a similar structure to that of the onion. Fennel has an intense flavor that is a result of the high amounts of essential oils it contains. The essential oils have many health-promoting properties. For example, they support digestion, are thought to inhibit inflammation, and strengthen the stomach. Fennel bulbs have green tops that are reminiscent of dill.

Reducing sugar and salt: For health reasons, we have deliberately reduced the amount of salt and oil. You can read more about this topic in our in-depth review of the book Salt Sugar Fat by Michael Moss. The reason the salt content is still too high is because of the soy sauce, which contains 5–6 % sodium.

Cleaning mushrooms: It works best to clean mushrooms dry using a brush. If there is a lot of visible dirt, you can wash them under running water. Never wash mushrooms in standing water as they absorb water quickly. Don’t store mushrooms at high temperature or in a damp place as this will cause them to spoil more quickly.

Varieties of quinoa: Instead of black quinoa, you can also use red or white quinoa. Don’t let it cook too long or it will get mushy.

When you need to save time: If you are in a hurry, you can also use precooked quinoa. For this recipe for 2–4 servings, you would need 200 g.