This Sun-Dried Tomato Tart with Zucchini Hummus has a crust made from walnuts and sun-dried tomatoes and is a fresh, raw vegan version of a traditional quiche.

Sun-Dried Tomato Tart with Zucchini Hummus from the blog “This Rawsome Vegan Life.” 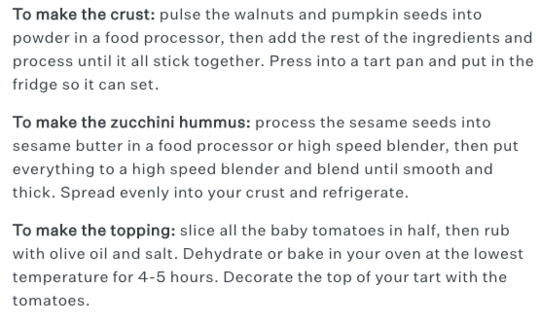 This Sun-Dried Tomato Tart with Zucchini Hummus has a crust made from walnuts and sun-dried tomatoes and is a fresh, raw vegan version of a traditional quiche.

Servings: The author did not specify a serving size. Since the recipe makes a tart that fits in a large quiche pan, we have set it for 6 servings.

Preparation time: The author did not specify the preparation time, so we have estimated it. We have assumed that you begin with step 3 and dehydrate the tomatoes for a maximum of 2.5 hours.

Nutritional profile: According to GDA guidelines, one serving exceeds the recommended daily requirement of the trace elements copper and manganese, which are important for the formation of cartilage tissue. It also covers the recommended daily requirement for potassium and the essential amino acid tryptophan. The ratio of omega-6 to omega-3 fatty acids in the tart is 10:1, which unfortunately significantly exceeds the recommended maximum ratio of 5:1. For this reason, we have created a health-optimized version of the recipe. You can find the link to the recipe and information on the reason behind our choice above the recipe photo.

Walnuts: Walnuts are the nuts that contain the highest proportion of linolenic acid (an omega-3 fatty acid that is healthy for the heart). In addition, they are rich in vitamin E, zinc (an important trace element for the liver and hair), and potassium (essential for the functioning of the heart and other organs).

Pumpkin seeds: Dried pumpkin seeds are rich in nutrients (e.g., protein, dietary fiber, iron, zinc, and magnesium). However, at 172:1, their ratio of omega-6 to omega-3 fatty acids by far exceeds the recommended maximum ratio of 5:1.

Sesame seeds: Sesame (Sesamum indicum) is an annual flowering plant that originated in certain areas of India and Africa. Today, it is widely cultivated in tropical and subtropical regions around the world and is valued for its oil and edible seeds. Sesame seed is one of the oldest oilseed crops known, and archeologists have documented evidence that the wild variety was domesticated in Asia around 3'000 BC. Sesame oil, sesame seeds, and the root have therapeutic and culinary uses. Depending on the type, the seed pods contain either black, brown, or white seeds. Black sesame seeds (Sesamum indicum nigrum) are more aromatic than the white variety. Sesame contains high amounts of calcium and selenium. However, it is also a strong allergen, which is why sesame must be declared on labels.

Side dish or entrée: This sun-dried tomato tart can be eaten as an entrée or a side dish. A side salad also goes well with this dish.

Zucchini: Zucchini shouldn’t be stored near apples, tomatoes, or other climacteric fruits. These fruits emit ethylene during the ripening process, which causes the zucchini to quickly ripen and spoil. You should not eat zucchini that taste bitter as this can be an indication of toxic bitter substances that can attack the gastrointestinal mucosa. When growing your own zucchini, you should make sure to neither cross-pollinate them using your own seeds nor to cross zucchini with other squash as this can result in a higher content of toxic bitter substances.

Healthy options: We have created a health-optimized recipe. To find out more, read this article: A Vegan Diet Can Be Unhealthy. Nutrition Mistakes.