Vegan broth has a wide variety of uses. This recipe is easy to make and can be varied to suit your taste. 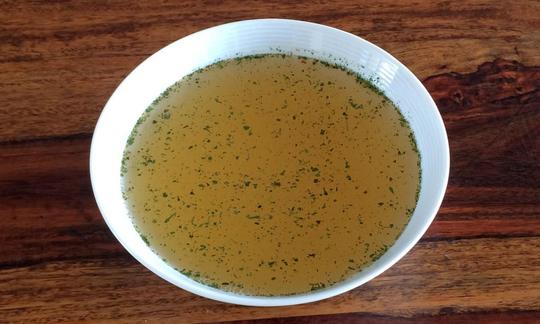 Vegan broth has a wide variety of uses. This recipe is easy to make and can be varied to suit your taste.

Estimated yield and boiling down: Although it first seems that large amounts of fluid and ingredients are used for this recipe, a recipe to serve 8 people will in the end make about 2 to 2.5 liters. This amount depends, however, on the temperature the burner is set to, the time the soup is boiled down, and the size of the pot. If you only plan to use part of the stock immediately, it is an estimated yield that you can use to plan the number of containers you will need for canning.

Tips for storing: Sterilize the canning jars briefly in boiling water and then let dry upside down on a clean towel. Pour the hot vegetable broth into the dry jars, close tightly, and let stand upside down for 5 minutes. It is important that the jars are sterile, so make sure to avoid any contact with the inside of the jars or lid.

Varying the ingredients: You can vary the vegetables and use your favorites and those that you have on hand. And you might like to add additional herbs and spices (e.g., oregano, thyme, or summer savory from the garden) or allspice berries and juniper berries.

Instant broth: To make instant broth, you can purée fresh vegetables in the blender, seasoning with salt, and then let dry. For this step, you have a variety of options. Either you can dry the vegetables in a dehydrator or you can spread the mixture out (layer should be about 1 cm thick) on a baking sheet lined with baking paper and then dry in the oven (at 60 °C for several hours or at 80 °C for 1–2 hours with additional drying on the fresh air). Then blend the dried mixture again until you have a fine powder.