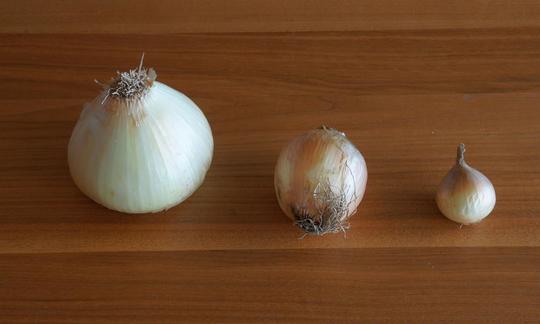 Onions, also called bulb onions and common onions, are in the genus Allium. The onion is one of the oldest cultivated plants and is also used as a medicinal plant. Onions were a food staple of the Romans. There are many important things to be aware of.

From Wikipedia: “Onions are commonly chopped and used as an ingredient in various hearty warm dishes, and may also be used as a main ingredient in their own right, for example in French onion soup or onion chutney. They are very versatile and can be baked, boiled, braised, grilled, fried, roasted, sautéed, or eaten raw in salads. Their layered nature makes them easy to hollow out once cooked, facilitating stuffing them. ...

Common onions are normally available in three colour varieties. Yellow or brown onions (called red in some European countries), are full-flavoured and are the onions of choice for everyday use. ... The red onion (called purple in some European countries) is a good choice for fresh use when its colour livens up the dish; it is also used in grilling. White onions are the traditional onions used in classic Mexican cuisine; they have a golden colour when cooked and a particularly sweet flavour when sautéed.

While the large, mature onion bulb is most often eaten, onions can be eaten at immature stages. Young plants may be harvested before bulbing occurs and used whole as spring onions or scallions. When an onion is harvested after bulbing has begun, but the onion is not yet mature, the plants are sometimes referred to as "summer" onions.

Additionally, onions may be bred and grown to mature at smaller sizes. Depending on the mature size and the purpose for which the onion is used, these may be referred to as pearl, boiler, or pickler onions, but differ from true pearl onions which are a different species.”

“Most onion cultivars are about 89% water, 4% sugar, 1% protein, 2% fibre, and 0.1% fat. Onions contain low amounts of essential nutrients, are low in fats, and have an energy value of 166 kJ (40 kcal) per 100 g (3.5 oz). They contribute their flavor to savory dishes without raising caloric content appreciably.

Onions contain phytochemical compounds such as phenolics that are under basic research to determine their possible properties in humans.

Considerable differences exist between onion varieties in polyphenol content, with shallots having the highest level, six times the amount found in Vidalia onions, the variety with the smallest amount. Yellow onions have the highest total flavonoid content, an amount 11 times higher than in white onions. Red onions have considerable content of anthocyanin pigments, with at least 25 different compounds identified representing 10% of total flavonoid content.”

“As is the case with all of the species in the genus Allium, onions do not contain any starch, but produce and store fructans as reserve energy. The human digestive system is not able to break down fructans enzymatically and absorb them in the small intestine. The majority then travel undigested into the large intestine and are metabolized there by natural bacterial flora, which produce gas in the process. After eating onions, it is very common to experience flatulence; the degradation products of the fructans and also sulfur-containing substances are responsible for the smell.*”

“Some people suffer from allergic reactions after handling onions. Symptoms can include contact dermatitis, intense itching, rhinoconjunctivitis, blurred vision, bronchial asthma, sweating, and anaphylaxis. Allergic reactions may not occur in these individuals to the consumption of onions, perhaps because of the denaturing of the proteins involved during the cooking process.”

“Freshly cut onions often cause a stinging sensation in the eyes of people nearby, and often uncontrollable tears. This is caused by the release of a volatile gas, syn-propanethial-S-oxide, which stimulates nerves in the eye creating a stinging sensation. ... Eye irritation can be avoided by cutting onions under running water or submerged in a basin of water. ... Refrigerating the onions before use reduces the enzyme reaction rate and using a fan can blow the gas away from the eyes.”