Banana-Nut-Bread Pancakes with Flaxseed and Walnuts

Banana-Nut-Bread Pancakes with Flaxseed and Walnuts are everything you love about banana nut bread, but in a pancake. 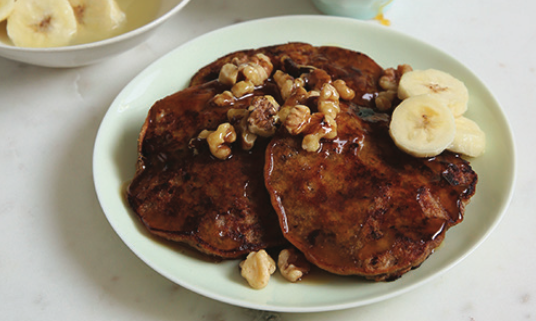 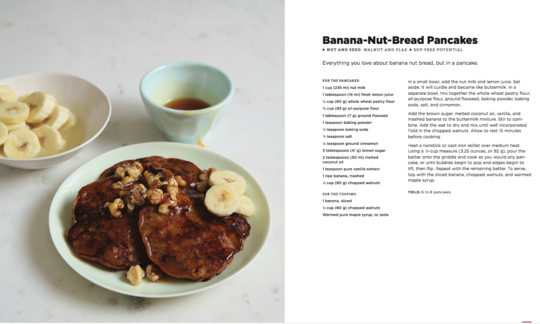 Banana-Nut-Bread Pancakes with Flaxseed and Walnuts are everything you love about banana nut bread, but in a pancake.

Servings: The ingredients for 4 servings yield enough for 6–8 pancakes (depending on the thickness).

Nutritional profile: According to GDA guidelines, one serving of this recipe covers more than the recommended daily requirement for omega-6 and omega-3 fatty acids. At 5:1, the ratio between linoleic acid (LA) and alpha-linolenic acid (ALA) is under the recommended maximum ratio of 5:1. It also covers almost 40 % of the daily requirement for selenium and 100 % for manganese.

Nut milk: This is a plant-based milk that is made from nuts and water (see “Tips”).

Flaxseed: Flaxseed are the seeds of the flax plant (common flax or linseed: Linum usitatissimum). They have a slightly nutty flavor and contain 40 % fat. Since this consists of about 50 % polyunsaturated omega-3 fatty acids (ALA), flaxseed oil has the highest concentration of omega-3 fatty acids of all known vegetable oils. People who eat a lot of convenience foods should increase the amount of flaxseed in their diet in order to in this respect somewhat compensate for poor dietary choices.

Walnuts: Walnuts are the nuts that contain the highest proportion of linolenic acid (ALA). In addition, they are rich in vitamin E, zinc (an important trace element for the liver and hair), and potassium (essential for the functioning of the heart and other organs).

Coconut oil: Coconut oil is solid at room temperature, but has a very low melting point and therefore turns very quickly to liquid. Given its high content of saturated fatty acids, coconut oil can more safely be heated to high temperatures (higher smoke point) and is as such suitable for frying, baking, deep-frying, and general cooking. But at 82 % saturated fatty acids, we do not recommend coconut oil, even if it is highly praised by the food industry. Read more about this in the article: A Vegan Diet Can Be Unhealthy. Nutrition Mistakes.

Baking powder vs. baking soda: Like baking powder, baking soda (also called sodium bicarbonate) is used to make baked goods rise better. However, it has a much stronger effect than baking powder and requires the presence of an acid to be effective. Baking powder is a mixture of sodium carbonate and a weak acid. Weinstein baking powder contains cream of tartar, which is a natural by-product in the wine-making process that is obtained from the crystalline deposits found inside wine barrels. It also contains cornstarch instead of flour (used as a separating agent).

Nut milk: We have listed almond milk as it is readily available. It is generally preferable to use unprocessed products. And it’s also easy to make your own almond milk. Here’s a recipe that you can use: Raw Almond Milk. Walnut milk is an even healthier type of plant-based milk. Walnuts have a good ratio of omega-6 to omega-3 fatty acids whereas almonds contain almost no omega-3 fatty acids.

Whole wheat flour: We recommend that you use 100 % whole wheat flour. Whole wheat flour is grain that has only had the awns and husks removed after harvesting. Fiber, vitamins, oils, and minerals are therefore retained in the bran and the germ. The oils have a particularly high nutritional value as they contain large amounts of essential fatty acids.

Healthy oils: Coconut oil contains mainly saturated fatty acids. The triglyceride content with unsaturated fatty acids is therefore extremely low. In terms of nutritional physiology, however, it is specifically the unsaturated, essential omega-6 (LA) and omega-3 fatty acids (ALA) that are important.
Canola oil contains high levels of essential fatty acids (esp. alpha-linolenic acid). With an LA:ALA ratio of 2:1, canola oil is an excellent choice and can help considerably to obtain an overall maximum ratio of 5:1. We recommend using healthy oils whenever possible.

Reducing the sugar: If you don’t need it to be so sweet, you can reduce the amount of sugar you add or even leave out the sugar. The banana alone may make the bread sweet enough.