Baking powder is used as a raising agent. It releases carbon dioxide into the dough, causing the dough to greatly increase in volume and have a lighter texture.
Water 33.1%  88/12/00  LA : ALA 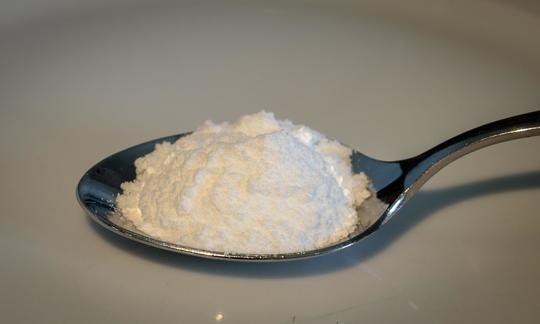 Baking powder is particularly important for baking cakes, pies, cookies, and other pastries. It adds volume and makes the dough have a lighter texture. It is best to add baking powder when the dough is practically finished so that you only have to stir it briefly. Then you should put the dough into the oven right away or store in the refrigerator until you are ready to bake it.

From Wikipedia: “Baking powder is a dry chemical leavening agent, a mixture of a carbonate or bicarbonate and a weak acid, and is used for increasing the volume and lightening the texture of baked goods. Baking powder works by releasing carbon dioxide gas into a batter or dough through an acid-base reaction, causing bubbles in the wet mixture to expand and thus leavening the mixture. It is used instead of yeast for end-products where fermentation flavors would be undesirable or where the batter lacks the elastic structure to hold gas bubbles for more than a few minutes, or to speed the production. Because carbon dioxide is released at a faster rate through the acid-base reaction than through fermentation, breads made by chemical leavening are called quick breads.”

“Generally one teaspoon (5 grams (0.18 oz)) of baking powder is used to raise a mixture of one cup (125 g) of flour, one cup of liquid, and one egg. However, if the mixture is acidic, baking powder's additional acids will remain unconsumed in the chemical reaction and often lend an unpleasant taste to food. High acidity can be caused by ingredients like buttermilk, lemon juice, yogurt, citrus or honey. When excessive acid is present, some of the baking powder should be replaced with baking soda. For example, one cup of flour, one egg, and one cup of buttermilk requires only ½ teaspoon of baking powder—the remaining leavening is caused by buttermilk acids reacting with ¼ teaspoon of baking soda.

“Baking powders also include components to improve their consistency and stability. The most important additive is cornstarch,[3] although potato starch may also be used. The inert starch serves several functions in baking powder. Primarily it is used to absorb moisture, and thus prolong shelf life by keeping the powder's additional alkaline and acidic components dry so as not to react with each other prematurely. A dry powder also flows and mixes more easily. Finally, the added bulk allows for more accurate measurements.”

“Moisture and heat can cause baking powder to lose its effectiveness over time, and commercial varieties have a somewhat arbitrary expiration date printed on the container. Regardless of the expiration date, the effectiveness can be tested by placing a teaspoon of the powder into a small container of hot water. If it bubbles energetically, it is still active and usable.”

“As described above, baking powder is mainly just baking soda mixed with an acid. In principle, a number of kitchen acids may be combined with baking soda to simulate commercial baking powders. Vinegar (dilute acetic acid), especially white vinegar, is also a common acidifier in baking; for example, many heirloom chocolate cake recipes call for a tablespoon or two of vinegar. Where a recipe already uses buttermilk or yogurt, baking soda can be used without cream of tartar (or with less). Alternatively, lemon juice can be substituted for some of the liquid in the recipe, to provide the required acidity to activate the baking soda. The main variable with the use of these kitchen acids is the rate of leavening.”

“In times past, when chemically manufactured baking soda was not available, "ash water" was used instead. Ashes from hardwood trees contain carbonates and bicarbonate salts, which can be extracted with water. This approach became obsolete with the availability of purified baking soda.”