This chilled pea and herb soup with almond foam is a refreshing, light dish with such an attractive presentation that it is worth the extra time and effort. 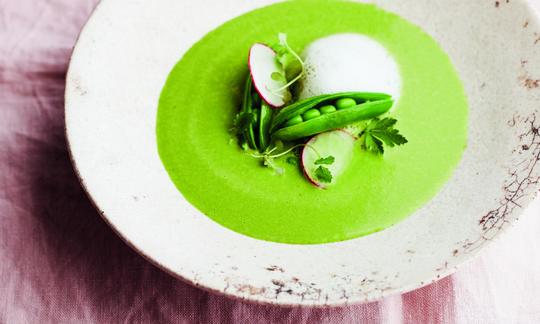 OverviewRichard Buckley presents a wealth of exquisite, creative recipes in his cookbook Plants Taste Better. The majority of the recipes take time and effort to prepare, which is why most of them are better suited for special occasions rather than everyday purposes. Plants Taste Better – Delicious Plant-Based Recipes, from Root to Fruit stands out on account of the all-natural, restaurant-quality recipes it contains.

SummaryPlants Taste Better – Delicious Plant-Based Recipes, from Root to Fruit contains many innovative and sophisticated Mediterranean dishes. Most of the ingredients for these often time-consuming dishes are fresh and can be purchased at any organic grocery store. Most of the recipes contain only a small amount of added oil. And sugar is primarily found as an ingredient in the small number of desserts included in this book. You will notice that preparation times are not included with the recipes. Since most of them are quite complicated and include several steps, it would be nice to have the estimated time required for each recipe included. It is, however, helpful that the author includes extra information about preparing certain ingredients, for instance, how to cook various types of pasta. Most of the recipes also offer a photograph of the finished dish, which is a nice touch.
Richard Buckley’s Plants Taste Better – Delicious Plant-Based Recipes, from Root to Fruit  is a vegan cookbook filled with exquisite recipes that are primarily Mediterranean and feature clean foods. Since many of the recipes require good planning and working on several steps in parallel, this book is for special occasions and best for experienced cooks.
Plants Taste Better by Richard Buckley is available from The Quarto Group and on Amazon.

About the author Richard Buckley was raised vegetarian and initially studied British literature before entering the world of professional vegetarian cooking. Today, he owns the Acorn Vegetarian Kitchen in Bath, England, which is considered to be one of the best vegetarian restaurants in the world.

ContentsIn the introduction, the author explains the philosophy behind cooking with plants. The chapter "The Craft of Plant-Based Cooking" discusses flavors, taste, texture, and the required or recommended equipment.

The recipes are divided into six chapters:

Snacks:You will find a large selection of recipes for finger foods including baked seeds, fried vegetables, oven-baked crisps, dips, and chutneys in this section. Most of the featured recipes are Mediterranean and include snacks like Tempura Kale, Garlic Panisse, and Fig Chutney. Given the methods used to prepare them, we feel that many of the recipes in this section contain too much oil.

Soups, pâtés & light lunches:Alongside soups and pâtés, this section also includes pickles and light vegetable dishes that can be served for lunch or as an appetizer. The author uses all fresh ingredients with the exception of one recipe that calls for canned beans. There is a very wide range of dishes, but about one-quarter of them contain fairly large amounts of oil. Some examples include Pea and Herb Soup with Almond Foam, Carrot & Cashew Pâté with Rye Crisp Breads and Pickles, and the Roasted Donkey Carrots with Cashew Cheese and Seeded Buckwheat.

Salads:This section primarily includes garnishes and toppings such as seeds, nuts, and powders, along with a handful of recipes that would work well served as appetizers. These include dishes like Roasted Cylindra Beetroot with Crushed Blackberry Dressing and Pistachio Purée, Mixed Toasted Seeds, and Orange Zest Powder.

Mains:You will find a nice variety of Mediterranean dishes here like homemade pasta, risotto, Spanish croquettes, and purées. The chapter also includes extensive information about making various types of pasta such as tortellini, gnocchi, and cavatelli.
Half of the recipes contain medium to high levels of fat. The ingredients are all fresh except for canned chickpeas, which are used in only one recipe. This chapter includes a wide range of recipes from Walnut Tortellini with a Red Wine Mushroom Reduction to Smoked Cashew Croquettes with Port-Glazed Red Beetroot (Beets) and Orange Emulsion, to Kale Purée.

Desserts:This short chapter includes cakes, mousses, and fruity desserts such as Spiced Pineapple with Candied Fennel and Olive Oil Semi-Freddo as well as Poached Pears with Frozen Pistachio Cacao Cream and Tarragon Granita. Most of these recipes contain large amounts of sugar, but lower amounts of added fats. Almost all the recipes include xanthan as a thickener and gelling agent, and some also include iota carrageenan powder.

Breads:In this section, you will find recipes for Rye Bread, Rye Crispbreads, and Focaccia along with oils, butters, and milks.

The cookbook Plants Taste Better – Delicious Plant-Based Recipes, from Root to Fruit concludes with a recipe index at the back of the book.

This chilled pea and herb soup with almond foam is a refreshing, light dish with such an attractive presentation that it is worth the extra time and effort.

Peas: Peas (Pisum sativum) are all climbing plants and members of the legume family. They originated from Asia Minor and are a good source of protein and carbohydrates. Since peas contain high levels of protein, they are often an ingredient in animal feed.

- Green peas or garden peas (also called sweet peas or English peas) have pods that are firm and full. The peas inside are removed, and the pods are discarded. Green peas are crisp to the bite and have a sweet flavor. They may be eaten raw or cooked. If peas are allowed to grow longer or if they aren’t used directly after being picked, they tend to take on a more starchy texture.

- Sugar snap peas, also known as snap peas, are a cross between snow peas and green peas. Their pods are rounded and not as flat as the pods of snow peas. Sugar snap peas are bigger, and the whole pod can be eaten, cooked or raw. They have a crisp texture and a very sweet flavor. Before eating, you might prefer to remove the strings at the seams of the pods.

Fava beans (broad beans) have a high starch and protein content. They are used as an ingredient for salads, soups, and stews, and also as a vegetable side dish. Fava beans are generally eaten when they are still young and tender. Individuals who suffer from glucose-6-phosphate dehydrogenase deficiency (G6PDD), a genetic error in metabolism that predisposes them to red cell breakdown, should avoid fava beans if they also suffer from favism. In Central Europe, about 1 % of the population has a G6PD deficiency, which can cause favism, but does not always do so.

Spinach (Spinacia oleracea) is rich in vitamins and minerals. Although spinach contains high levels of oxalic acid, eating raw spinach in moderation is not bad for your health. In larger amounts, consuming foods with high levels of oxalic acid can interfere with iron supplementation (e.g., to treat an iron deficiency anemia). This is because oxalic acid makes it more difficult for iron to ab absorbed in the intestine.

Chives are a popular herb used to season raw and cooked dishes. They contain traces of sulfur and are rich in vitamin K. And just 35 grams is enough to meet 100 % of the recommended daily allowance for potassium.

The “green” effect of blanching: Some types of vegetables take on an almost bright green color after they are blanched. This is because short cooking or blanching times stop the degradation process of the green leaf pigment chlorophyll. The heat destroys a large part of the enzymes involved in degradation, which is why the vegetables retain their color, flavor, and structure. However, it is important that the (short!) heating process is directly followed by plunging in or rinsing with cold water. We have included more information about blanching in the “Tips” section. This information comes from the author Richard Buckley.

Blanching and shocking green vegetables: Bring the water to a boil before you add the vegetables. You need a lot of water so that the water doesn’t stop boiling when you add the greens, and they can cook as quickly as possible. Have a lot of ice-cold water to plunge your greens into once cooked so that the cooking stops instantly and the temperature of the greens drops as quickly as possible. ... As soon as they are cold, remove them from the water ...

Remark from Richard Buckley: Mix and match depending on what you have available and what is best in season.