White wine vinegar has a mildly sour and fruity flavor. Use it in salads and to enhance the flavor of light sauces and seafood dishes.
Water 93.9%  91/09/00  LA : ALA

A carafe of white wine vinegar and one with red wine vinegar. Red and white grapes are on the side. 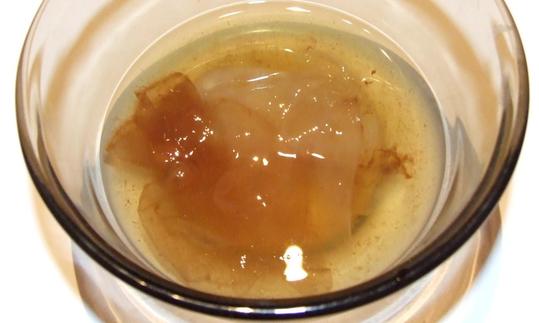 White wine vinegar has a mildly sour flavor reminiscent of white wine. You can use it in salads and sauces, and to enhance vegetable and seafood dishes. The quality of the vinegar depends upon the quality of the wine used in making it. Ingredients such as herbs are often added to flavor the vinegar.

Vinegar is commonly used in food preparation, in pickling processes, vinaigrettes, and other salad dressings. It is an ingredient in ready-made sauces such as hot sauce, mustard, ketchup, and mayonnaise. Vinegar is sometimes used while making chutneys and marinades and is often used on its own as a condiment.
You can use vinegar to make a refreshing beverage by simply mixing sugar water or honey water with small amounts of fruity vinegar. The ancient Greek oxymel is a drink made from vinegar and honey. Many people still use vinegar and honey mixtures for their health benefits.
Vinegar is ideal for washing produce because it breaks down the wax coating and kills bacteria and mold. The editors of Cook's Illustrated found vinegar to be the most effective and safest way to wash fruits and vegetables, beating antibacterial soap, water and just a scrub brush in removing bacteria.1

- Gather your vessel. Because acetobacter bacteria need oxygen to work, a wide-mouth crock or other non-metal container is best. Do not fill the container more than about half-full to maximize the surface area ratio.

- Gather your ingredients: Use 1 part starter (or mother), 1 part distilled water and two parts alcoholic beverage. Use unsulfited organic alcohols if possible. You can order starter online. Add alcohol and water to your vessel. Stir. Pour in the starter or mother. Place cloth or a few layers of cheesecloth over the container and secure with a rubber band. Set the vinegar pot where the temperature stays between 18 – 32 oC (65 – 90 oF). Keep the container out of sunlight and drafts.

- Taste the vinegar: After a couple of weeks, sample a spoonful of the vinegar. If the liquid tastes like vinegar, it’s ready. You may want to leave it to ferment longer for a stronger flavor.

- Strain and decant: Pour the liquid through a strainer. Decant almost all of it to a clean glass jar with a tight-fitting lid or new cork. The vinegar will continue to age and mellow in the bottle.

- Save the mother: Put the mother back into the fermenting vessel and pour remaining vinegar over it. This is the mother of vinegar for your next batch. You can either start a new batch now or let your mother sit at room temperature for up to a month until you’re ready to use it again.

- Age the vinegar: Store the vinegar at 50 to 60 degrees for six months to mellow and let particles settle. Use the vinegar as is, dilute it to your taste, or infuse it with herbs or other flavors.

- Storing: Store the bottled and tightly sealed vinegar in a cool, dark area until you are ready to use it. The vinegar will improve for up to two years. Opened vinegar will last indefinitely without the use of refrigeration.

Household vinegar is a liquid consisting of about 5–6% acetic acid. It is very low in sodium, saturated fat, and cholesterol. Vinegar contains small amounts of manganese.

Some preliminary research indicates that taking vinegar with food increases satiety and reduces the amount of food consumed. … The "growing" of several common foodborne pathogens sensitive to acidity is inhibited by common vinegar (5% acetic acid).…Combined with 60% salicylic acid, it is significantly more effective than a placebo for the treatment of warts.1
Grape-based and apple vinegars contain the antioxidant quercetin. Vinegar contains phenols, naturally occurring plant compounds linked with reduced cancer risk.

Wikipedia: Vinegar is a liquid consisting of about 5–20% acetic acid (CH3COOH), water, and other trace chemicals, which may include flavorings. ... Vinegar is now mainly used as a cooking ingredient, or in pickling. As the most easily manufactured mild acid, it has historically had a great variety of industrial, medical, and domestic uses, some of which (such as its use as a general household cleaner) are still commonly practiced today … Vinegar has been made and used by people for thousands of years. Traces of it have been found in Egyptian urns from around 3000 BC.1

Other uses for vinegar:

You can use vinegar as a household cleaning agent and to dissolve mineral deposits from coffee makers and dishwashers. Use vinegar to clean windows and mirrors. For most uses, dilution with water is recommended for safety and to avoid damaging the surfaces being cleaned.1

Commercial vinegar is produced either by a fast or a slow fermentation process. In general, slow methods are used in traditional vinegars where fermentation proceeds slowly over the course of a few months or up to a year. ... Fast methods add mother of vinegar (bacterial culture) to the source liquid before adding air to oxygenate and promote the fastest fermentation. In fast production processes, vinegar may be produced in between 20 hours to three days.1
Source materials for making vinegar are varied, including different fruits, grains, alcoholic beverages or other fermentable materials.

The Orleans process is one of the oldest and most well-known methods to produce vinegar. Wine or other alcoholic liquid is poured into the barrel, and a small amount of vinegar containing a mass of vinegar bacteria, called mother of vinegar, is added to start the reaction.

Vinegar bacteria require oxygen for the fermentation process. Mother of vinegar (bacterial culture) is added to the source liquid before adding air to oxygenate and promote the fastest fermentation.

The solera method is different in that fermentation and aging does not occur in one barrel. Solera is a process for aging liquids such as wine, beer, vinegar, and brandy, by fractional blending in such a way that the finished product is a mixture of ages, with the average age gradually increasing as the process continues over many years.3
You can flavor vinegar by adding spices, herbs, or fruit to it.

Mother of vinegar is a substance composed of a form of cellulose and acetic acid bacteria that develops on fermenting alcoholic liquids, which turns alcohol into acetic acid with the help of oxygen from the air. It is added to wine, cider, or other alcoholic liquids along with exposure to oxygen to produce vinegar.
… Mother of vinegar can also form in store-bought vinegar ... While not appetizing in appearance, mother of vinegar is completely harmless, and the surrounding vinegar does not have to be discarded because of it. It can be filtered out using a coffee filter, used to start a bottle of vinegar, or simply ignored.4