This banana bread is moist, yet dairy-free. It gets its delicious tropical flavor from candied ginger and rum-soaked mango and banana. 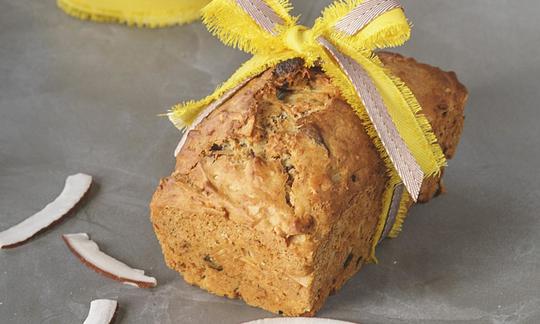 This banana bread is moist, yet dairy-free. It gets its delicious tropical flavor from candied ginger and rum-soaked mango and banana.

Dried fruit is often treated with sulfur dioxide: Treating dried fruit with sulfur dioxide has two distinct advantages for large-scale industrial producers. First, the sulfur dioxide layer helps to prevent spoiling as it inhibits the metabolism of many microorganisms and in this way increases the shelf life of the product. And second, it allows the fruit to maintain its original color. The latter occurs thanks to the fact that sulfur dioxide inhibits enzymes that promote oxidation. This makes the fruit look more attractive for consumers, but in general we advise against purchasing and consuming dried fruit that has been treated. The preservation process destroys several vitamins, such as folic acid, and sulfur dioxide can be harmful for people with asthma or allergies.

Spelt flour: Spelt flour is closely related to wheat and is often referred to as “proto-wheat.” It is classified by type number according to the amount of mineral content in 100 grams. Spelt flour can be purchased as type 630, 812, and 1050. The higher the type number, the more nutrient dense and healthier the spelt flour. Spelt flour is also available in whole grain form. Type 630 works well for making baked goods, and it can often be used as a substitute for wheat flour. Types 812 and 1050 have a higher mineral content. The differences between spelt and wheat are negligible when it comes to nutritional content. But compared to wheat, spelt does contain much higher levels of silica.

Almond milk: Almond milk is a plant-based milk containing almonds and water that is used as an alternative to dairy milk. You can use commercial almond milk or make it yourself. See the link under “Alternative preparation.” You can customize homemade almond milk and make it thicker or thinner to suit your taste preferences. Store-bought almond milk usually contains less than 10 % almonds. Almonds (like parsley) are a good source of iron.

Almond butter: Almond butter can be raw, but it is usually steam-treated and does not qualify as a raw food unless it is specifically labeled as such. It is a more nutritious source of energy than peanut butter and contains half the amount of saturated fatty acids. It can be crunchy or smooth. If the oil separates, this just means that the nut butter does not contain emulsifiers. Depending on how it is processed, almond butter may be made from raw or roasted almonds. You can also make almond butter yourself. Click on the link under “Alternative preparation.”

Carob powder: Carob powder is obtained by grinding carob pods. It is very low in fat and free of the stimulating substances contained in caffeine. Carob powder has a fruity, caramel flavor and is a good alternative to cocoa, and is often used as an ingredient in mousses, puddings, and cakes. To obtain high-quality carob, only the middle parts of the pods are used since the ends are often too bitter. The middle parts are then coarsely chopped, roasted, and ground into St John’s-bread (carob powder). If it isn’t labeled as such, carob powder is not raw!

Ground vanilla is not vanilla sugar: Although these two terms are sometimes used incorrectly as synonyms, they are two very different products. Ground vanilla, also called vanilla powder, is obtained by grinding vanilla bean pods. Vanilla sugar, however, is a mixture of vanilla and natural vanilla flavor or vanilla extract. Vanilla bean pods are not raw.

You can replace the ground vanilla with vanilla pulp from a vanilla bean pod.