These amazingly moist and fruity coconut and raspberry muffins with coconut and lupine flour are just the right thing for your next summer party. 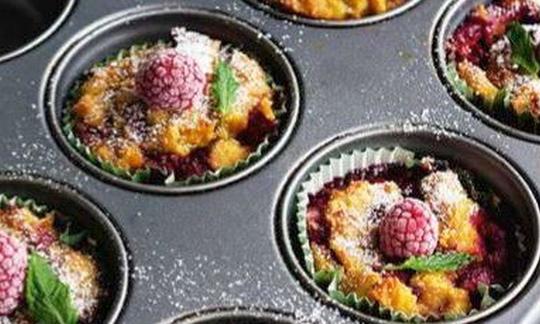 These amazingly moist and fruity coconut and raspberry muffins with coconut and lupine flour are just the right thing for your next summer party.

Yield: The recipe for 6 servings makes about 12 small muffins.

Lupine flour: Lupine flour is made from seeds of “sweet” lupine species, which have been bred to contain low levels of alkaloids. The seeds are ground and then the resulting flakes are soaked so that the protein is released from the fiber structures. Next the liquid is evaporated and the resulting product is the lupine flour. Lupine contains all of the essential amino acids and is therefore a favorite protein source for vegans and vegetarians. The lupine seeds also contain high amounts of carotenoids, vitamin E, potassium, magnesium, and iron. In contrast to many other legumes, lupine contains alkaline protein, which causes very little uric acid to form. It is therefore especially suited for people who as a result of rheumatic disease or gout need to eat a low-purine diet. However, lupine can be problematic for those with allergies. Either a sensitivity to lupine itself can appear or a cross-allergy to lupine if you are already allergic to other legumes, especially peanuts.

Coconut flour: Coconut flour is a gluten-free alternative to wheat flour. It is made from ground and dried coconut meat from which the oil has been extracted. Compared to coconut meat, it is relatively low in fat. Follow the link in the “Ingredients” section for a recipe to make your own coconut flour.

Bananas: Bananas have a very balanced combination of carbohydrates. When it comes to the trace elements, bananas contain the most copper of all fruits and vegetables. They also contain more iron than most fruits and are rich in potassium, phosphorus, and magnesium. Of all the fruits, bananas have the highest levels of manganese. Manganese is especially important for the metabolism of carbohydrates. In addition, vitamin B1 in the tissues can only be used if manganese is present as it is necessary for certain enzymatic functions in the metabolism of B1.

Raspberries: If you don’t have fresh raspberries available, you can also use the frozen variety (as called for in the original recipe).

Plant-based milk and a link to a recipe: In the original recipe, Elisa Epping uses unsweetened plant-based milk. We have listed almond milk because it is very easy to make yourself. Here is a link to our recipe: Raw Almond Milk. You can, of course, alternatively use cashew milk, soy milk, or another type of plant-based milk.

Other types of fruit: What about strawberries, blueberries, or blackberries? Go ahead and try out other variations using your favorite fruits — just make sure to use similar amounts as in the original recipe so that the batter has the right consistency.