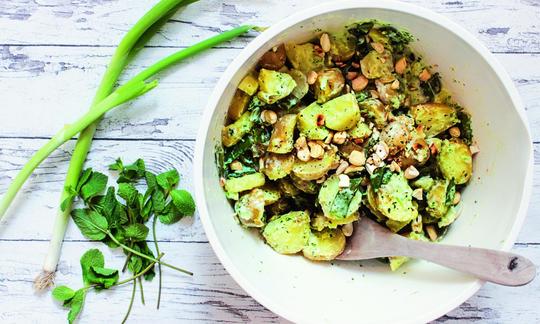 Nutritional profile: A serving of this recipe provides more than 75 % of the recommended daily requirement of alpha-linolenic acid, and, depending on the amount of lemon juice used, almost 50 % of the daily recommended requirement for vitamin C. This recipe has a very good ratio of omega-6 to omega-3 fatty acids as it does not exceed the recommendation of 5:1.

Sugar snap peas: Sugar snap peas are a pea variety in the legume family. You can eat the entire pod and don’t have to shell them. The flavor is similar to that of peas, but they are slightly sweeter and juicier. In addition to adding sugar snap peas to stir-fries or curries, they can also be eaten raw in salads as they don’t contain any phasin, which causes damage to blood cells and the intestinal wall when consumed in large quantities. Some sugar snap peas have tough “strings” running along the top of the pod from base to tip that have to be removed before cooking or eating raw. Simply snap off the ends of the peas and pull the strings off. Since fresh sugar snap peas don’t keep for that long, they should be eaten within a few days. Alternatively, they can be blanched and frozen.

Mint: Moroccan mint is a cultivar of spearmint. It has a milder flavor than peppermint and is well suited for use in a wide variety of recipes. Moroccan mint has a mild peppery flavor and a sweet, minty fresh aroma. It contains less menthol compared to other mints, especially peppermint, but has a nice minty scent (a reason why we have chosen this variety of mint).

Soy yogurt: Soy yogurt is made by adding live bacteria cultures to fermented soy milk. We do not regard soy milk and soy yogurt as raw foods since the soybeans are heated during the production process.

Cashews: Cashews sold at the grocery store are not actually raw. Their shells contain a toxic nut shell liquid (cardol) that has to be deactivated by roasting or steaming. Cashews are a good source of minerals such as magnesium, which is good for bone health, as well as iron, which is an important component of hemoglobin and red blood cells. Since vitamin C promotes the absorption of iron, the lime juice (containing ascorbic acid) that this recipe calls for has benefits both in terms of health and taste.

Potato varieties: It is best to use waxy potatoes for this recipe so that they will keep their shape in the salad.

Reducing the salt: It’s worth it to reduce your overall salt intake. A total of 2.5 g of table salt (1 g of sodium) per day is optimal, especially if you have high blood pressure. The lethal dose for an adult is about ten tablespoons of pure table salt (click on salt in the ingredient list for more info). Since the amount of salt we need to season food varies, try it out for yourself and see where and by how much you can reduce your salt intake. For more information on the topic, we would encourage you to read the book Salt, Sugar, Fat.