This Bohemian apple cake with semolina, nuts, and vanilla tastes fruity and light. It is a delicious dessert that is quick and easy to prepare. 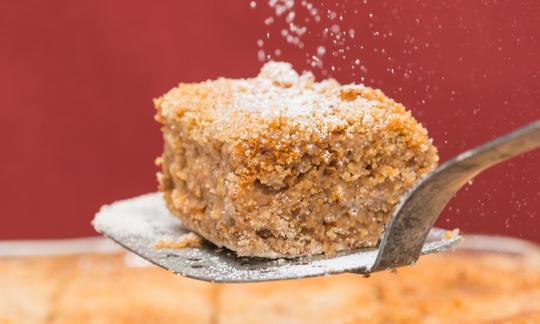 This Bohemian apple cake with semolina, nuts, and vanilla tastes fruity and light. It is a delicious dessert that is quick and easy to prepare.

Yield: This recipe makes one apple cake with a diameter of 24 cm.

Spelt flour: Spelt flour is closely related to wheat and is often referred to as “proto-wheat.” White spelt flour (type 630) is mainly used to make rolls, baguettes, and baked goods, and in most recipes it can be used as a substitute for wheat flour. This is because it has properties similar to wheat flour that make it suitable for baking, unlike types 812 and 1050, which have a higher mineral content. There are certain differences between spelt and wheat when it comes to amino acids, vitamins, and minerals, but it is questionable whether these small differences have any significant effect. However, as compared to wheat, spelt does contain much higher levels of silica.

Semolina: Semolina is obtained from grains, usually durum wheat or soft wheat (also called farina), in a rather complex process. The milling process allows semolina to be ground to a specific size, either fine, medium, or coarse. Farina is mainly used for desserts and breakfast cereals, whereas durum wheat semolina is primarily used for hearty dishes such as semolina dumplings (Griessnocken).

Margarine and its spreadability: Organic margarines may not contain chemical additives and donʼt undergo the process of chemical hydrogenation. However, they are still soft and spreadable. They are manufactured using special emulsion processes that include the use of water or steam or the addition of semi-solid fats (e.g., palm oil or coconut oil).

Tip from the author on the best varieties of apples to use: The apple varieties Boskoop or Topaz work especially well for this recipe.

Optimal cake pan size: A cake pan with a diameter of about 24 cm is best.

Canola oil instead of margarine: Canola oil contains a significantly higher amount of essential fatty acids than, for example, olive oil. If you don’t have any high-quality margarine available, you can use canola oil for this recipe (amount in milliliters should be the same as the grams listed for margarine).