This broad bean stew gets its typical oriental flavor from the combination of fresh dill, garlic, turmeric, and lemon juice. 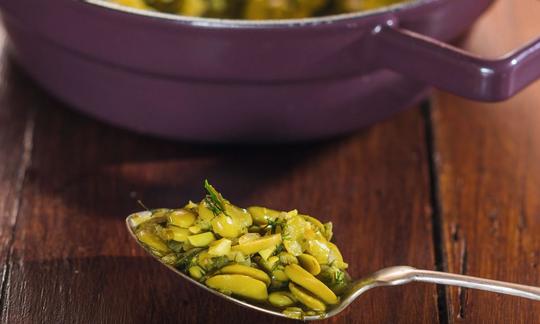 With Vegan Middle East, Parvin Razavi created a cooking book that contains easily prepared recipes, which most often can be made in a short time. While vegetables of all kind are the main ingredients, the variety of herbs and spices make the dishes so excitingly different from those vegan recipes we’re seeing so often.

About the authorBorn in Iran and emigrated to Austria, Parvin Razavi was influenced by her middle eastern family and fascinated by scents. She started experimenting with food at an early age. Today she is writing her food blog "thx4cooking", works as an editor for Biorama, a magazine for a sustainable lifestyle and offers her cooking in form of private catering commissions.

ContentsThis book starts with a foreword about the author. The glossary introduces typical middle eastern ingredients illustrated by colorful drawings.

The recipes are divided into six chapters by the country of origin:

Each chapter starts with a register of the dishes shown in this section.

In the middle east it is common, to serve several dishes at once, instead of serving one dish per meal only, called mezze. In Vegan Middle East the author adheres to this tradition with classical courses composed out of main courses, side dishes, hot drinks and desserts. In between she intersperses chosen ingredients such as artichokes and dates.

IranLight dishes with yogurt or citrus salad and pickled vegetable are among the recipes as well as soups and stews using lentils or beans and rice dishes combined with flavorful spices and herbs. You’ll find here for example "Broad bean stew with dill sauce" (Ackerbohneneintopf mit Dillsauce) and "Blanched spinach with soya yogurt".

Armenia"Chickpeas with spinach", "Mante (homemade dumplings) stuffed with squash” and “stuffed vine leaves” are recipes among the Armenian dishes.

EgyptApart from one, all recipes offered here are main courses. Lentils, beans, couscous, chickpeas and potatoes are the main ingredients found here. “Egyptian falafel”, “Stuffed tomatoes” and “white bean stew” are among those dishes.

MoroccoThis chapter contains dishes with lots of vegetables, like “Caramelized fennel with fennel seeds and barberries” and “Vegetable tagine with quince”, a stew containing courgette, using cumin and cinnamon as spices.

​Turkey“Börek stuffed with swiss chard”, “Braised artichokes” and “Turkish semolina cake” are among the Turkish dishes.

Summary / overall impressionIn Vegan Recipes from the Middle East Parvin Razani provides the reader with a broad selection of flavorful dishes from different cultures which are mostly easy to prepare. The recipes are middle eastern classics but you’ll also find some tasty surprises. The author focuses on the use of fresh ecological and organic ingredients. In terms of soya only soya yogurt is used which, if wished, can be replaced easily by any other vegetable-based yogurt. Spices and herbs such as cumin, saffron, turmeric, cinnamon, cardamom, dill and coriander are often used ingredients. Among the dishes desserts, which in the middle east often contain bigger amounts of sugar and oil, are reduced to a few only. The presentation of the book is clear, containing preparation- and cooking time, tips and beautiful pictures for all of the listed recipes. Background information about selected ingredients allows the reader to get a better understanding of the Middle Eastern culture.

An appealing cooking book for vegan and non-vegan people and for all who are curious experiencing something new.

Vegan recipes from the middle east gives vegan cooking a different direction and enables the reader to experience some new flavorful culinary delights.

The cooking book Vegan Recipes from the Middle East is published by Grub Street.

This broad bean stew gets its typical oriental flavor from the combination of fresh dill, garlic, turmeric, and lemon juice.

Quantity: Meze dishes are appetizers in Greek or Middle Eastern cuisine that are often served with an aperitif. Depending on how many appetizers are included, they are usually prepared to serve 2–4 people. If intended as a main course, the quantities in the ingredient list should be doubled.

Meze: A meze is a dish, hot or cold, that is served alone or together with other mezes. The purpose of the meze is to complement and enhance the taste of the aperitif and to create a nice setting for a social gathering. Everyone at the table shares the little plates of appetizers.

Fava beans (broad beans): Fava beans, also known as broad beans, have been cultivated as a staple food source for many thousands of years. They are also one of the easiest plants to grow. Fava beans contain high amounts of starch and protein and are often used for soups and stews. Unlike green beans, fava beans contain very little phasine and lectine, which is why they can also be eaten raw. However, people who suffer from favism should avoid fava beans as these can trigger a hemolytic crisis.

Turmeric: Turmeric, also called Indian saffron, comes from South Asia and is in the ginger family. Fresh turmeric has a peppery, slightly spicy taste. Dried, as is generally the case in India, it tastes milder and slightly bitter. Turmeric is best stored in a dark place; otherwise, it tends to lose color and flavor.

Dill: Dill is an annual herb in the celery family and widely grown in Eurasia where its leaves and seeds are used as an herb or spice for flavoring dishes. The aroma of dill leaves is best when used fresh as it loses its flavor rapidly if dried. The fronds of dill plants resemble fennel leaves, but they taste very different.

- Fresh fava beans are available between June and September. To prepare, remove the beans from their pods. Bring some water to a boil, add the beans, and allow them to cook for about 2 minutes. Place the beans in a bowl of cold water and once cooled down, squeeze gently to remove the tender green beans from the thick, leathery pods.

- To prepare dried fava beans, cover the beans with water and soak for about 2 hours. Remove the beans from the pods and then cook.

- Storage: You can store fresh fava beans for up to 4 days in the refrigerator, whereas dried beans can be stored much longer.

How to serve this dish: “Serve with rice and soy yogurt.”

Reducing salt and oil: We have intentionally reduced the amount of salt and oil. For more information on this topic, please see our review of Michael Moss’ book Salt Sugar Fat.