This carrot birthday cake with a pistachio, orange, and coconut topping is a delectable and creamy raw vegan treat. 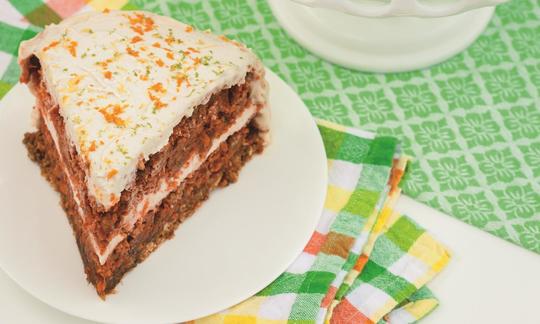 This carrot birthday cake with a pistachio, orange, and coconut topping is a delectable and creamy raw vegan treat.

Servings: The quantities listed are enough to make a 23 cm (9 inch) cake, or 10 servings. It can serve more, depending on the size of the servings and how hungry your guests are.

Coconut water: Coconut water, not to be confused with coconut milk, is the almost fat-free, clear liquid from young coconuts. As coconuts mature, the amount of coconut water in the fruit decreases. Coconut water contains the same ratio of minerals to liquid as human blood, and as a result it is an isotonic substance that is easily absorbed and processed by our bodies. This means that coconut water is a good source of liquids for hydration. Because it contains low amounts of glucose and sodium, it is not suitable for electrolyte replacement (such as that needed in cases of severe diarrhea).

Carrots and carotene: Carrots are a favorite low-calorie raw food that are known for their high levels of carotenoids. Carotenoids are fat-soluble phytonutrients, of which beta-carotene is probably the most famous. Beta-carotene is representative of the carotene group of nutrients and is a precursor of vitamin A. It is also referred to as pro-vitamin A.

In plants, carotenoids serve an important role in photosynthesis, provide protection from UV rays, and protect roots from infections.

hile there is still much debate about whether beta-carotene protects against cancer in humans, the protective action that it has upon cells as an antioxidant is proven. Synthetically manufactured beta-carotene is used in everyday foods such as food coloring (for example in margarine) and added to vitamins as a nutrient. When preparing carrots, it is good to add a little fat to the dish to better absorb the fat-soluble carotene.

- Cashews: Cashews are seldom truly raw because heat is usually used to remove the cardol they contain. When you see cashews marked “raw,” this almost always means that the cardol was removed in a steam, rather than a roasting, process. We can only be assured that an item is truly raw when the process is explained in detail and controlled.

Raw dried fruit: Fruit dried at low temperatures (42 °C or below) is considered raw and is labeled as such.

Springform pan size: You will get the best results by using a 23 cm (9 inch) springform pan.

Storing carrots: Carrots will keep longer if you take them out of the plastic packaging and remove the green tops before storing in the refrigerator.

Fresh mulberries: Mulberries resemble blackberries with their long and oval shape. They have a sweet flavor when fully ripe. While this recipe calls for carefully dried raw mulberries, it is worth the effort to keep a watch out for the fresh variety. Fresh mulberries are very delicate and juicy, so it is difficult to ship them over long distances. The ripe fruit of the most common mulberry cultivar is black, but red and white mulberries are also available. When they are dried carefully, mulberries are a raw food, but in the drying process they almost always lose quite a bit of their color. The color derives from anthocyanins, which are natural, water-soluble colors that are currently under research for their potential protective mechanisms against various diseases.

Adjusting the frosting: When we prepared this recipe, we noticed that the second layer of the cake mixture often sinks into the frosting and does not remain in an even layer. If you want the cake to be a little more stable when you assemble it, place in the freezer for about 30 minutes after you prepare and frost the first layer. Remove from the freezer and then add and frost the second layer.