This raw vegan recipe for healthy stuffed mushrooms with pesto made from almonds and dried tomatoes is easy to make and requires just a few ingredients. 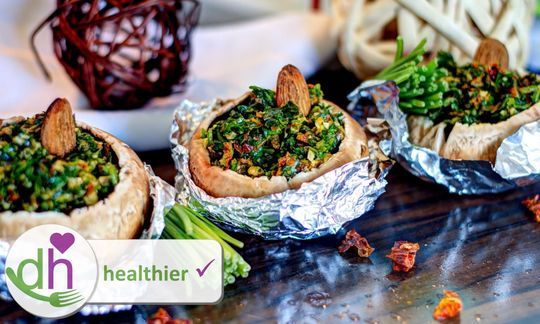 This raw vegan recipe for healthy stuffed mushrooms with pesto made from almonds and dried tomatoes is easy to make and requires just a few ingredients.

New nutritional profile: Thanks to the parsley, this recipe is a very good source for vitamin K. According to GDA guidelines, it meets almost 100 % of the recommended daily requirement of copper and contains high amounts of vitamin B2, C, and E as well as the mineral potassium. As a result of the changes we made to the original recipe, the ratio of omega-6 to omega-3 fatty acids is under the maximum recommended ratio of 5:1.

Olive oil versus canola oil: We have used canola oil instead of olive oil for the following reasons: Economic powers and lobbyists have given olive oil cult status although it has a ratio of omega-6 (LA) to omega-3 fatty acids (ALA) that is significantly over the recommended maximum ratio of 5:1. And compared to olive oil, canola oil contains much higher levels of essential fatty acids, especially omega-3 fatty acids.

Author’s answer to our comment that the original recipe is very unhealthy: I didn’t create the recipes for this cookbook so that they would healthy in every way. Instead, I focused on developing recipes that taste delicious. However, the healthier variation also tastes good.

Pesto: The classic pesto that we make today originated in the region of Liguaria, Italy. It was first documented in 1863. Predecessors were likely similar pastes called moretum and garum, which were eaten by the Romans. This pesto with sun-dried tomatoes is a version of Pesto alla siciliana (also: pesto rosso “red pesto”). This is the Sicilian variety that is known beyond the region.

Pesto varieties: It is very common to use basil instead of parsley, and this recipe is then also a vegan pesto without Parmesan, Pecorino, or any other cheese. Traditionally, pesto was made by grinding or crushing the ingredients using a mortar and pestle. (Incidentally, “pestare” means to pound or crush). In this recipe, almonds are used instead of pine nuts. Both work well.

Selecting the mushrooms: For each person, select two large mushrooms or portobello mushrooms. Alternatively, you can fill the pesto into several smaller mushrooms.

Storage: You can store the pesto in a screw-top jar in the refrigerator for up to three weeks, especially if you protect the surface by coating it with a layer of oil.

Reducing the oil: We have reduced the amount of oil from 50 ml to 15 ml (1 tablespoon), thereby reducing the fat content from 85 % to 40 % of the recommended daily allowance.
Please click on the link if your health is important to you:
A Vegan Diet Can Be Unhealthy. Nutrition Mistakes.
Dr. Dean Ornish and other American health experts advise reducing oil as much as possible. For this reason, we have cut the amount of oil in this recipe by about a third.

Note from the author: At first glance, this recipe looks very simple, but it is a great way to start a raw vegan evening, especially if you are entertaining. You can also stuff the mushrooms with avocado cream or cashew cheese (cheese made from cashews).

Cheesy flavor: If you like savory dishes or the addition of cheese, try using nutritional yeast flakes as a vegan alternative for grated cheese and cheese sauces.

Oil: For the pesto, you can also use another high-quality oil (e.g., flaxseed or walnut oil) of your choice.

Nuts: In place of the almonds, you can use walnuts. These have an omega-6 (LA) to omega-3 (ALA) fatty acids of 4:1 whereas almonds contain practically no omega-3.