Selenium is important for our health, and by eating Brazil nuts it is easy to get the daily recommended amount of this essential trace mineral. 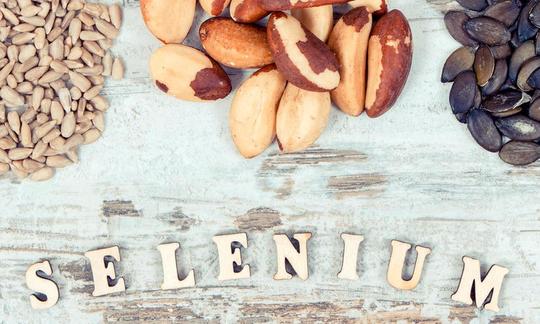 Selenium is important for our health, and by eating Brazil nuts it is easy to get the daily recommended amount of this essential trace mineral.

The importance of the trace element selenium has become clear in recent years, but there are contradictory findings. Selenium deficiencies can occur in areas with little selenium in the soil such as in China, New Zealand, and parts of Scandinavia (e.g., Finland). Such deficiencies are also common in the German-speaking countries and other parts of Europe.

In particular, vegans who don’t eat a well-balanced diet, people on dialysis, and alcoholics should occasionally have the selenoprotein P levels in their blood checked — or eat two Brazil nuts a day, or a maximum of four if they are from Bolivia. The same applies to individuals who have experienced prolonged bleeding, have breast-fed over a longer period of time, have had severe injuries, or other similar conditions.

From our text on selenium (link above): “If you eat four nuts a day (5 g net) from Brazil, you would be exceeding the tolerable quantity of 300 µg recommended by the European Food Safety Authority (EFSA) and also the limit of 400 µg set by the National Academy of Medicine, NAM (previously Institute of Medicine, IoM). Such a regular intake could cause significant harm. For small children, the Tolerable Upper Intake Level (UL) is 60 µg per day.”

The human body contains 10 to 20 mg of selenium. In Europe, an average daily intake of 30 to 70 µg (up to a maximum of 300 µg) is recommended — but no more than a max. of 300 µg because 400–800 µg of selenium daily is toxic. The Food and Drug Administration in the United States recommends 55 µg daily for women and 70 µg for men. The recommendation for children depends on their age and weight and ranges from 5 to 60 µg daily.

Since Brazil nuts contain barium and other natural radioactive substances (such as radium-226 and radium-228), we advise against consuming higher amounts of these nuts. Another reason we advise limiting your consumption is that Brazil nuts contain high levels of linoleic acid (LA), a fatty acid that promotes inflammation and which we already get too much of in relation to alpha-linolenic acid (ALA).

One organic vendor “naturally” sees the situation differently: Approximately 6 Brazil nuts covers the daily recommended requirement for selenium. ... 100 g of Brazil nuts contain 250 micrograms of selenium on average (450% of the nutrient reference value, NRV). January 2019. We see such statements as greatly misleading. And Brazil nuts are not the only source of selenium. However, Brazil nuts are extremely rich in selenium and not even liver, which is the animal product containing the highest levels of selenium, can come close to this.

Wikipedia: Some patient groups who took selenium have had a reduced incidence of prostate cancer, lung cancer, and colon cancer. In 1990 it was shown that deiodinase, the the most important enzyme for the function of thyroid hormones (type 1), depends on selenium. ... Low selenium levels in the blood are statistically related to an increased incidence of coronary heart disease. Find out more by looking at the nutrition table for selenium and reading about the ingredient Brazil nuts.

Shelf life: The nuts can be stored in their shells for up to a year if stored in a cool,dry place. Shelled Brazil nuts should be stored in a cool place in an air-tight container because they have a high fat content (particularly the proportion of linoleic acid) and prolonged contact with the air can cause them to rot.

You can either eat Brazil nuts directly or grate them into Erb Muesli. Another suggestion for healthy eating is to eat an apply every day. See our Apple Recipe. Basic information about nutrition mistakes that you can avoid with helpful tips and suggestions for change can be found at the following link: A Vegan Diet Can Be Unhealthy. Nutrition Mistakes.