This Instant Vegetable Broth with Carrots, Celery, and Leek is a delicious base for soups and can be stored up to a year. Ingredients can be varied as desired. 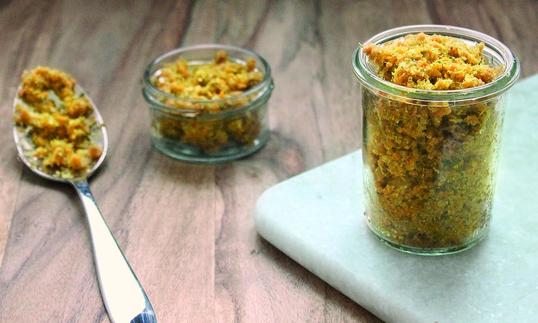 This Instant Vegetable Broth with Carrots, Celery, and Leek is a delicious base for soups and can be stored up to a year. Ingredients can be varied as desired.

Yield and serving size: According to the author, the quantity of ingredients we have selected for 10 portions yields approx. 500 grams of instant vegetable broth. Use 1 teaspoon per 250 mL of liquid.

Celery: Celery root is a cultivated form of wild celery. Thanks to its essential oils, celery root has a fresh, clean flavor that stimulates both appetite and digestion. In natural medicine, celery root is used to help with rheumatism, stomach, and intestinal disorders as well as kidney and bladder problems.

Carrots and carotene: Carrots are a favorite low-calorie raw food that are known for their high levels of carotenoids. Carotenoids are fat-soluble phytonutrients, of which beta-carotene is probably the most famous. Beta-carotene is representative of the carotene group of nutrients and is a precursor of vitamin A. It is also referred to as pro-vitamin-A.

In plants, carotenoids serve an important role in photosynthesis, provide protection from UV rays, and protect roots from infections.

While there is still much debate about whether beta-carotene protects against cancer in humans, the protective action that it has upon cells as an antioxidant has been shown.

Leek: Leeks are grown mainly in Europe and other areas around the Mediterranean sea. The taste is similar to that of its relatives onions and garlic, but milder. Leeks give many dishes a richer flavor. They work well in soups, vegetable side dishes, quiches, and casseroles. You can also eat them raw or grated in salads. The typical smell of leeks comes from the sulfur compound propanthial S-oxide and gives soups, casseroles, and other dishes an aromatic flavor.

Sea salt: Sea salt is usually obtained by allowing salt water to evaporate in specially designed salt evaporation ponds. It has been harvested this way since ancient times. Sea salt is different from other table salts in a number of ways, but it contains very little bromine and only the smallest traces of iodine and iodide. For this reason, even though people think that sea salt is healthier, there is no nutritional evidence to back up this belief.

Celery: After you peel celery root, it will discolor quickly. To help prevent this, you can drizzle lemon juice on raw celery root and add vinegar or lemon juice to the cooking water.

As low-salt as possible: The vast majority of commercial (instant) vegetable broths contain far too much salt, which affects the health of people suffering from hypertension and other conditions. Sodium is found in many natural ingredients, albeit in small amounts.

Ingredient variations: You can vary the ingredients according to taste and the vegetables available. Depending on your preferences, you can also add other herbs (e.g., oregano, thyme, and savory) or pimento seeds and juniper berries.

Raw variation: Instead of drying in the oven, you can also use a dehydrator. If dehydrated at a low enough temperature, this recipe can also be prepared as a raw dish. In this case, however, a very long drying time (> 12h) is required, which means that the recipe cannot be prepared within half a day.

Salt: Instead of sea salt, you can also use normal table salt.