This lentil dal, which contains apples, turmeric, and cumin, has a thick, creamy consistency and a surprisingly savory, complex flavor. 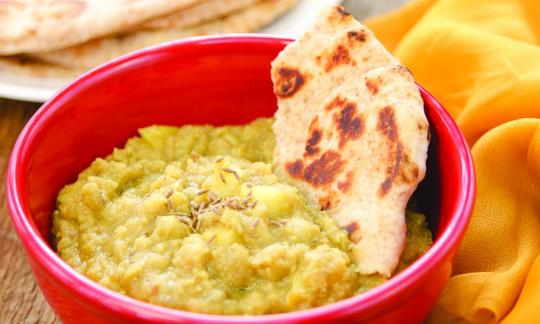 This spicy Indian lentil dal, which contains apples,  turmeric, and cumin, is inexpensive and easy to make and also has a surprisingly savory, complex flavor.

Dal: Dal is a typical Indian dish, usually made with legumes, mostly lentils that have had the hulls removed. Through the cooking process, the legumes get quite soft. Dal is typically spiced with cumin, onion, chili, and the like.

Red lentils: Thanks to the high-quality protein they contain, lentils are a very good source of plant protein for vegans. The different types of lentils, which are all round and flat, differ not only in size but also in color. Red lentils come from India and are particularly known from the national dish dal. As they are already hulled, they cook quickly, and turn into a kind of purée. And you don’t have to soak them ahead of time. They have a neutral flavor and take on the taste of the spices well.

Cumin: Cumin is often confused with caraway because they have a similar name in many languages (e.g., in German: Kreuzkümmel and Kümmel). However, they actually aren’t closely related and have a very different flavor. Cumin is often used in Indian, Turkish, and Greek cuisine.

Turmeric: Turmeric, also called Indian saffron, is from South Asia and is in the ginger family. Fresh turmeric has a peppery, slightly spicy taste. Dried, as it is generally found in India, it tastes milder and slightly bitter. Turmeric is best stored for shorter periods of time in a dark place; otherwise, it will lose color and flavor.

Salt: The original recipe calls for 1–1¼ teaspoons salt, but we have deliberately reduced this amount. The aim is to keep the salt content as low as possible, without having any loss in flavor. Since the salt needed varies according to taste, it is best to decide for yourself how much you want to use. For an interesting book on the subject, we would like to recommend you read Salt, Sugar, Fat.

Apples: It is best to use a variety that is not too sweet, but it’s fine to go ahead and use the type that you have available.

For spiciness: For adults, you can increase the degree of spiciness by adding crushed chili peppers to the dish.

Serving suggestions: The dish tastes delicious served on short-grain rice, basmati whole grain rice, quinoa, or millet. It can also be rolled into tortillas or large cabbage leaves as a juicy wrap filling. By adding more water during the preparation, this dish can also function very well as a soup. It then makes enough for 2 servings. The original recipe indicates that it is for 5–6 people, but then the servings are quite small, so we have listed it as 4 servings.

Consistency: The amount of liquid called for in the recipe results in a rather watery consistency. We recommend you use half of the specified quantity and add more as needed. If you would like a more fruity taste, you can add a second apple.

Spices: The classic dal recipe also calls for coriander seed, garlic, and ginger, which give it a spicier, more traditional Indian taste.