Soy sauce (tamari) is not only used as a dip for sushi. The savory sauce made from soybeans also works well as a marinade and a seasoning for stir-fried dishes.
Water 66.0%  34/65/01  LA : ALA 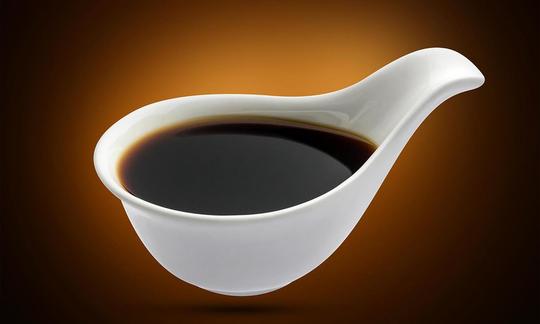 Soy sauce (Tamari) in a small white ceramic chinese spoon against a background in shades of brown. 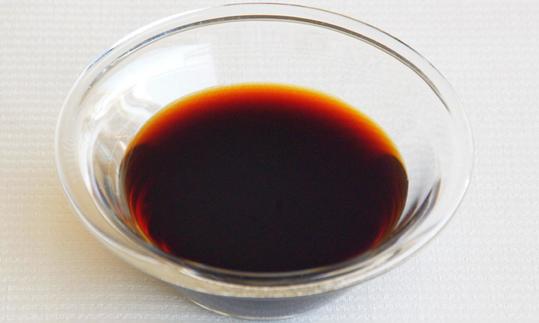 Soy sauce in a glass bowl. Soy sauce is primarily used in Asian dishes. As a marinade, it adds nice flavor to tofu.

Soy sauce is available in both light and dark varieties. Light soy sauce comes from the first pressing of soybeans, tastes rather salty, and is the most common type. Dark soy sauce is fermented longer and often has caramel or molasses added to it. It is less salty, thicker, and has a slightly sweet taste.

From Wikipedia: “Soy sauce (also called soya sauce) is a condiment made from a fermented paste of boiled soybeans, roasted grain, brine, and Aspergillus oryzae or Aspergillus sojae molds. It originated in its current form in China in the 2nd century AD and spread throughout East and Southeast Asia where it is used in cooking and as a condiment.”

Soy sauce is generally either called shōyu or tamari. Tamari has a stronger flavor and doesnʼt contain any wheat or rice. The word soy comes from the Japanese term shōyu.

“Soy sauce is made either by fermentation or by hydrolysis. Some commercial sauces have both fermented and chemical sauces. ...

Traditional soy sauces are made by mixing soybeans and grain with mold cultures such as Aspergillus oryzae and other related microorganisms and yeasts (the resulting mixture is called "koji" in Japan; the term "koji" is used both for the mixture of soybeans, wheat, and mold as well as for the mold itself). Historically, the mixture was fermented naturally in large urns and under the sun, which was believed to contribute extra flavors. Today, the mixture is placed in a temperature and humidity controlled incubation chamber. ... ”

The steps to make traditional soy sauce include cooking and soaking, Koji culturing, brewing, pressing, pasteurization, and storage. Follow the above link to read more.

“Some brands of soy sauce are made from acid-hydrolyzed soy protein instead of brewed with a traditional culture. This takes about three days. Although they have a different flavor, aroma, and texture when compared to brewed soy sauces, they have a longer shelf life and are usually made for this reason. The clear plastic packets of dark sauce common with Chinese-style take-out food typically use a hydrolyzed vegetable protein formula. Some higher-quality hydrolyzed vegetable protein products with no added salt, sugar or colorings are sold as low-sodium soy sauce alternatives called "liquid aminos" in health food stores, similar to the way salt substitutes are used. These products are, however, not necessarily low in sodium.”

“Soy sauce is widely used as an important flavoring and has been integrated into the traditional cuisines of many East Asian and Southeast Asian cultures. Despite their rather similar appearance, soy sauces made in different cultures and regions are different in taste, consistency, fragrance and saltiness. Soy sauce retains its quality longer when kept away from direct sunlight.”

We don’t consider soy sauce to be raw. Soybeans are generally heated during the production process since green beans of all types contain the glycoprotein phasin, which is toxic for humans. Phasin inhibits the absorption of nutrients in the intestine, causes hemagglutination (clumping of the red blood cells), and in larger amounts can destroy the intestinal villi. Heating processes (e.g., cooking and roasting) destroy phasin and make soybeans and soybean products such as tofu, miso, and tempeh edible for humans. As a result, even unpasteurized soy products are not actually raw, but are instead cooked products that have been “revived” through the process of fermentation.

“A study by the National University of Singapore showed that Chinese dark soy sauce contains 10 times the antioxidants of red wine, and can help prevent cardiovascular diseases. Soy sauce is rich in lactic acid bacteria and of excellent anti-allergic potential.

Soy sauce does not contain the level of isoflavones associated with other soy products such as tofu or edamame. It can also be very salty, having a salt content of between 14–18%. Low-sodium soy sauces are made, but it is difficult to make soy sauce without using some quantity of salt as an antimicrobial agent.

“Most varieties of soy sauce contain wheat, to which some people have a medical intolerance. However, some naturally brewed soy sauces made with wheat may be tolerated by people with a specific intolerance to gluten because gluten is not detectable in the finished product. Japanese tamari soy sauce is traditionally wheat-free, and some tamari available commercially today is wheat- and gluten-free.”