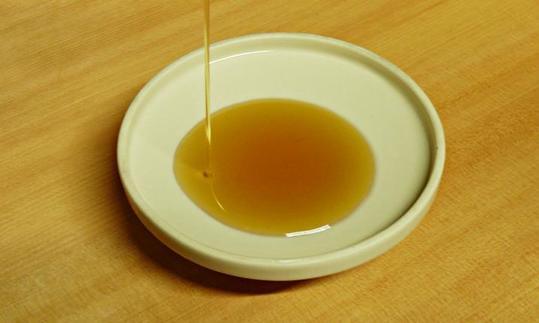 From Wikipedia: “Sesame oil is an edible vegetable oil derived from sesame seeds. Besides being used as a cooking oil in South India, it is often used as a flavour enhancer in Korean, Chinese, Japanese, Middle Eastern, and Southeast Asian cuisine. It has a distinctive nutty aroma and taste.

The oil from the nutrient-rich seed is popular in lternative medicine, from traditional massages and treatments to the modern day.

The oil is popular in Asia and is also one of the earliest-known crop-based oils, but world-wide mass modern production continues to be limited even today due to the inefficient manual harvesting process required to extract the oil.”

“The only essential nutrient having significant content in sesame oil is vitamin K, providing 17% of the Daily Value per 100 grams (ml) consumed supplying 884 calories. For fats, sesame oil is approximately equal in monounsaturated (oleic acid) and polyunsaturated (linoleic acid) fats, totaling together 80% of the fat content. The remaining oil content is primarily the saturated fat, palmitic acid (about 9% of total).”

“One type of sesame oil, a pale yellow liquid with a pleasant grain-like odor and somewhat nutty taste is used as frying oil. A second type of oil, amber-colored and aromatic, is made from pressed and toasted sesame seeds. Although popular in ethnic cooking, it is not suitable as a cooking oil because it burns readily. Instead, amber sesame oil is normally added as a flavoring agent in the final stages of cooking.

Despite sesame oil's high proportion (41%) of polyunsaturated (Omega-6) fatty acids, it is least prone, among cooking oils with high smoke points, to turn rancid when kept in the open. This is due to the natural antioxidants, such as sesamol, present in the oil.

Sesame oil is most popular in Asia, especially in Korea, China, and the South Indian states of Karnataka, Andhra Pradesh, and Tamil Nadu, where its widespread use is similar to that of olive oil in the Mediterranean.

“In Ayurvedic medicine, sesame oil (til tel) is used for massaging as it is believed to rid the body of heat due to its viscous nature upon rubbing. It is also used for hair and scalp massage. It is also used in many cosmetic applications, including as a carrier oil.”

“In industry, sesame oil may be used as

“As with numerous seed and nut foods, sesame oil may produce an allergic reaction, although the incidence of this effect is rare at approximately 0.1% of the population. Reports of sesame allergy are growing in developed countries during the 21st century, with the allergic mechanism from oil exposure expressed as contact dermatitis, possibly resulting from hypersensitivity to lignin-like compounds.”