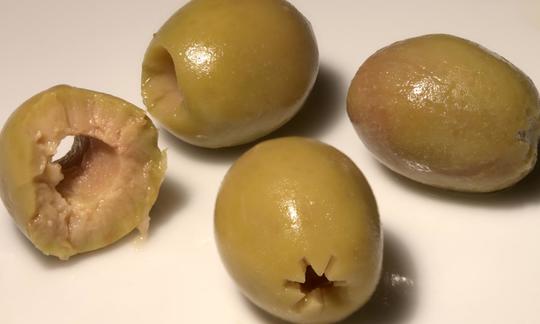 Green olives are very bitter when raw and are therefore usually cured in oil, citric acid, oil, salt brine, or an herb stock. After about a month, the bitter components are no longer present and the olives are ready for sale.

From Wikipedia: “The olive, known by the botanical name Olea europaea, meaning "European olive", is a species of small tree in the family Oleaceae, found in the Mediterranean Basin from Portugal to the Levant, the Arabian Peninsula, and southern Asia as far east as China, as well as the Canary Islands, Mauritius, and Réunion. The species is cultivated in many places and considered naturalized in all the countries of the Mediterranean coast, as well as in Argentina, Saudi Arabia, Java, Norfolk Island, California, and Bermuda. ...

The olive's fruit, also called the olive, is of major agricultural importance in the Mediterranean region as the source of olive oil; it is one of the three core ingredients in Mediterranean cuisine. The tree and its fruit give their name to the plant family, which also includes species such as lilacs, jasmine, Forsythia and the true ash trees (Fraxinus).”

“The olive tree, Olea europaea, has been cultivated for olive oil, fine wood, olive leaf, and the olive fruit. 90% of all harvested olives are turned into oil, while about 10% are used as table olives. The olive is one of the "trinity" or "triad" of basic ingredients in Mediterranean cuisine, the other two being wheat for bread, pasta and couscous, and the grape for wine.”

“Table olives are classified by the IOC into 3 groups according to the degree of ripeness achieved before harvesting:

“The polyphenol composition of olive fruits varies during fruit ripening and during processing by fermentation when olives are immersed whole in brine or crushed to produce oil. In raw fruit, total polyphenol contents, as measured by the Folin method, are 117 mg/100 g in black olives and 161 mg/100 g in green olives, compared to 55 and 21 mg/100 g for extra virgin and virgin olive oil, respectively. Olive fruit contains several types of polyphenols, mainly tyrosols, phenolic acids, flavonols and flavones, and for black olives, anthocyanins. The main bitter flavor of olives before curing results from oleuropein and its aglycone which total in content, respectively, 72 and 82 mg/100 g in black olives, and 56 and 59 mg/100 g in green olives. ...

Polyphenol content also varies with olive cultivar (Spanish Manzanillo highest) and the manner of presentation, with plain olives having higher contents than those that are pitted or stuffed.”

“​Olives are one of the most extensively cultivated fruit crops in the world.”

“​Olive tree pollen is extremely allergenic, with an OPALS allergy scale rating of 10 out of 10. Olea europaea is primarily wind-pollinated, and their light, buoyant pollen is a strong trigger for asthma.”