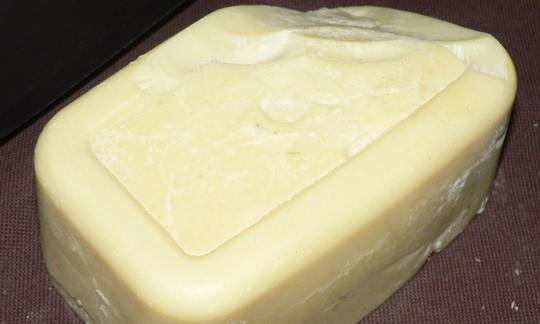 Cocoa butter is a vegetable fat that is produced from cocoa beans in a multistep process. The high amounts of saturated fatty acids, primarily palmitic acid (16: 0) and steric acid (18: 0), compared to the low amounts of unsaturated fatty acids that it contains allow it to have a long shelf life, provided that it is kept in a cool, dark place. With the right manufacturing process, cocoa butter can also be produced to be a raw food. Although cocoa butter is actually a “waste product” in the production process of cocao powder, the fat solubility of several of its flavor compounds causes it to have a strong cocoa taste. Thanks to these and other properties, cocoa butter is a common ingredient in chocolate and desserts and is also used in other areas such as the cosmetic industry.

In the food industry, cocoa butter is used in the production of nougat and white chocolate and is also added to milk chocolate and candy melts. Furthermore, it is mixed with cocoa and processed to make a couverture for baked goods and pralines.1

Apart from the culinary uses already listed, cocoa butter is also used as an ingredient in many desserts, ice creams, and other sweet dishes.

From a chemical perspective, cocoa butter consists mainly of the triglycerides of fatty acids: these include about 22–30 % palmitic acid, 32–37 % stearic acid, 30–37 % oleic acid, and 2–4 % linoleic acid. Cocoa butter also contains low amounts of sterols and methyl sterols such as β-sitosterol, stigmasterol, and campesterol, as well as traces of cholesterol. The saponification number (saponification number / Koettstorfer number) is in the range of 194.0–196.0.2

As such, cocoa butter consists primarily of saturated fatty acids, namely palmitic acid (16:0) and steric acid (18:0). Although cocoa butter isn’t known for the vitamins it contains, it does contain a notable amount of vitamin K and vitamin E.

Pharmaceutical companies heavily use cocoa butter's physical properties. As a nontoxic solid at room temperature that melts at body temperature, it is considered an ideal base for medicinal suppositories.2

From Wikipedia: Cocoa butter, also called theobroma oil, is a pale-yellow, edible vegetable fat extracted from the cocoa bean. It is used to make chocolate, as well as some ointments, toiletries, and pharmaceuticals. Cocoa butter has a cocoa flavor and aroma. Its best-known attribute is its melting point, which is just below human body temperature.2

Some food manufacturers substitute less expensive materials such as vegetable oils and fats in place of cocoa butter. Several analytical methods exist for testing for diluted cocoa butter. Adulterated cocoa butter is indicated by its lighter color and its diminished fluorescence upon ultraviolet illumination. Unlike cocoa butter, adulterated fat tends to smear and have a higher non-saponifiable content.2

Cocoa butter is becoming increasingly expensive. Substitutes have been designed to use as alternatives. In the United States, 100% cocoa butter must be used for the product to be called chocolate. The EU requires that alternative fats not exceed 5% of the total fat content. Fats used for this purpose include: cocoa butter substitute; coconut oil or palm oil; cocoa butter replacer; soybean oil, rapeseed oil and cottonseed oil; cocoa butter equivalent; shea butter, illipe, sal nut, palm, mango kernel fat, palm oils, and PGPR.2

Cocoa butter is one of the most stable fats known, a quality that, coupled with natural antioxidants, prevents rancidity, giving it a storage life of two to five years. The velvety texture, pleasant fragrance and emollient properties of cocoa butter have made it a popular ingredient in products for the skin, such as soaps and lotions. The moisturizing abilities of cocoa butter are frequently recommended for prevention of stretch marks in pregnant women, treatment of chapped or burned skin and lips, and as a daily moisturizer to prevent dry, itchy skin. Cocoa butter's moisturizing properties are also said to be effective for treating mouth sores. However, the largest clinical study regarding the effects of cocoa butter on stretch marks in pregnant women found that results were no different from a placebo.2