Vegan Meringues Made from Aquafaba

Aquafaba, the cooking liquid from chickpeas, serves as the egg white substitute for these vegan meringues. 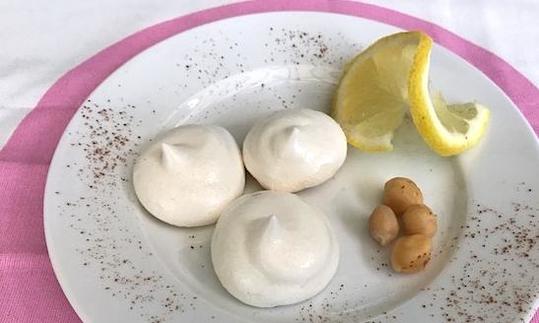 Vegan Meringues Made from Aquaba, prepared and arranged on a plate 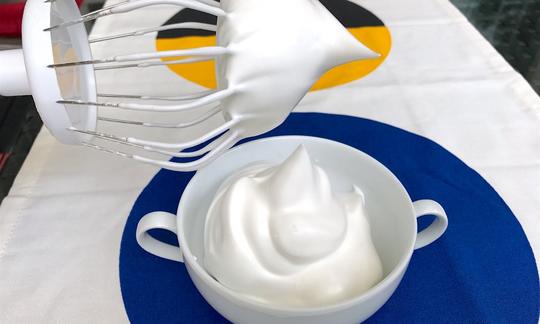 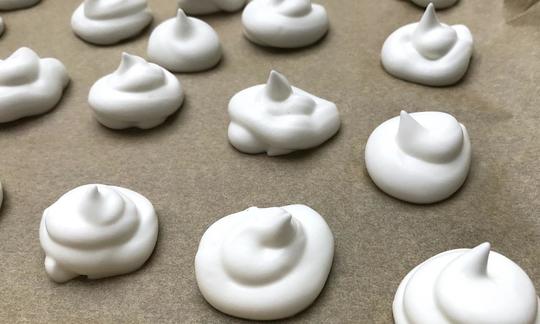 Aquafaba, the cooking liquid from chickpeas, serves as the egg white substitute for these vegan meringues.

Yield: The recipe for 10 servings makes about 40 to 60 meringues.

Meringue: It is interesting to note that meringue is called “Baiser” (from the French word “kiss”) or “spanischer Wind” (Spanish wind) in German. These names both point to the light and airy consistency of meringues. The origin of the word meringue is unclear although there is a widespread assumption that it originated around 1600 from the Italian confectioner Gasparini in the village of Meiringen (Switzerland). The first verifiable mention of the word can be found in a French cookbook in 1691.When the meringues are in the oven, they are more dried than baked, and at the end they should still be soft and not have taken on a brown color. Thanks to the discovery of aquafaba, vegans can now enjoy a vegan version of this dessert.

Aquafaba: Aquafaba is the name given to the cooking liquid of chickpeas and other legumes. It is used as an egg white substitute to make beaten egg whites and is therefore particularly important in vegan cuisine and for people who have an egg protein allergy. Aquafaba consists of carbohydrates, proteins, and other plant substances that have passed into the cooking liquid during the cooking process. This gives aquafaba its foaming, emulsifying, binding, and gelling properties. In contrast to egg whites, once Aquafaba has been collected, it can easily be frozen, thawed, heated, and cooled without losing its ability to foam up. Aquafaba also remains stable for hours after whipping and doesn’t collapse.

Jars instead of cans: If you are going to use the quick variety (see “Chickpea water from canned chickpeas”), then make sure to buy organic chickpeas. These are often processed more gently, and most importantly they usually contain very few or no additives at all. And it is even better to buy organic chickpeas in glass jars (organic brands often choose glass jars). These do not contain any aluminum or BPA (bisphenol A) and are more environmentally friendly. The inside layer of cans are lined with epoxy resins and these contain bisphenol A (BPA), which exhibits estrogen-mimicking, hormone-like properties. Studies have shown that BPA can affect reproduction in animals, in particular, in the organs involved. In addition, long-term exposure is often associated with cardiovascular disease and obesity but has not yet been proven. A study conducted in 2011 showed that eating canned foods regularly quickly leads to high BPA exposure. You can find the study at this address: ncbi nlm nih gov/pmc/articles /PMC3367259/.

Chickpea water from canned chickpeas: A jar of chickpeas contains between 120 and 150 ml of chickpea water. This is just the right amount for this recipe and usually works better than using the drained water from homemade chickpeas. However, make sure to purchase high-quality chickpeas that don’t contain added preservatives.

Making aquafaba: It is easiest to drain store-bought chickpeas and use this chickpea water to make aquafaba. Alternatively, you can use 1½ cups (about 300 g) of dried chickpeas. Soak for at least 8 hours and then cook covered in a pressure cooker for 15–20 minutes. The liquid should reduce and get slightly thicker. Drain the chickpeas, collecting the chickpea water (the aquafaba) in a container. Whipping aquafaba made in this manner is a little more difficult. You may have to bring the liquid to a boil again so that it will thicken even more. And you will have to whip the aquafaba longer to obtain the desired consistency.

Tips for achieving good results: Just as with egg whites, using a clean bowl helps to more easily achieve a nice meringue. You can accelerate the process considerably if you put the bowl in the freezer for 10 minutes before using.

Flavor: To enhance the flavor, try adding some cinnamon or vanilla to the meringue. You might want to experiment a bit with the amount to see how it affects the final result.